Unknown individuals are illegally occupying and deforesting protected land in the small rural community of Luz Bella. The Paraguayan authorities could stop this but are not taking action. In fact, they are part of the problem.

The community carefully manages and legally owns the land, which is a forest reserve. However, INDERT, the government agency responsible for issuing land titles, has allowed the reserve to be illegally occupied.

Because the community already owns the land INDERT should not allocate new plots in the area. The new occupiers have already begun to destroy the forest. 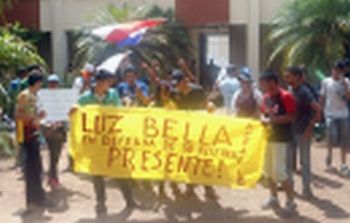 Community leaders from Luz Bella have repeatedly requested that the authorities act to end the destruction. But they have failed to do so. If the authorities do not respond, more of the reserve will be lost.

Much of Paraguay’s biodiversity has already been lost through deforestation linked to large-scale cattle and soy farming.

Your international pressure will encourage the Government of Paraguay to act. Please act now in support of Luz Bella and ask the Paraguayan authorities to return the land to the community of Luz Bella and end this environmental injustice.

Sobrevivencia (Friends of the Earth Paraguay) has asked that appeals be sent to four targets in Paraguay – the Minister for the Environment, the head of the agency responsible for issuing land titles, the National Forestry Institute and the environmental branch of the Public Prosecutor’s office.

Sobrevivencia believes this will create the most effective pressure. Please send your letters to all four if possible. Thank you.

A suggested text for your letters is provided in Spanish with an English translation is provided.