Friends of the Earth supporter, Manchester Local Group member, and award-winning community campaigner Ali Abbas is passionate about finding a solution to our energy crisis. He wants the Government to introduce a ‘clean power target’ that would slash the carbon in our electricity system, and encourage a rapid switch to renewable energy. 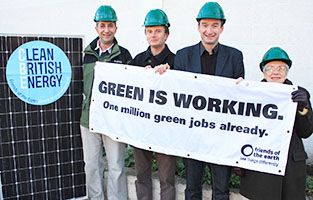 My name’s Ali. I work as a business analyst, I’m a Friends of the Earth supporter, and I volunteer with the Manchester Friends of the Earth local group. (I’m the one standing next to the solar PV panel).  And I’ve decided to write to every member of the House of Lords.

Why? Because in less than two weeks, the Lords could vote YES to a clean power target – which would slash the carbon in our electricity system, and encourage a rapid switch to renewable energy.

Please sign my letter, asking the Lords to vote YES to clean power

Now we have another chance. I’ve heard reports that if enough Peers come along on the day of the vote, there’s a very good chance we could win this. Let’s remind them to turn up and vote for clean power.

A YES vote would help stop fracking and the reckless dash for gas, and help us avoid the worst effects of climate change.

We’ve got 10 days to persuade Lords to vote YES – let’s make the most of this opportunity.

You can see a copy of Ali’s letter here.