This month, as part of Year of the Pulses we are celebrating the Haricot bean, Phaseolus vulgaris.   These are small, oval, plump and creamy-white beans with a mild flavour and smooth, buttery texture. 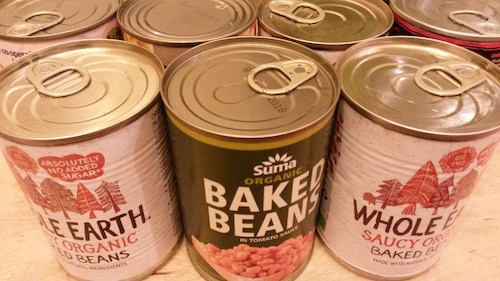 Thought to have orginated in South America, the Haricot made its way to Europe in the 15th Century.

In the US, they are known as navy beans and are the classic ingredient in Boston baked beans. Haricot beans are widely used in the cooking of countries such as France, Spain, Portugal and South America. In Italy they are known as borlotti beans. With little flavour of their own, they absorb other aromas and flavours easily, which makes them popular beans to use in bean salads, vegetable soups, slow-cooked dishes such as cassoulet or bean purées. They are the most popular bean eaten in the UK forming the basis of canned Baked beans.

Like all beans they are a great source of protein, fibre, potassium, selenium and other minerals; and can contribute to lowering cholesterol levels. They also exhibit antibacterial and anti-fungal activity, and have been found to inhibit cancer cell growth.

Although they have a reputation for causing flatulence, this can be avoided by changing the soaking water several times and ensuring they are cooked well 🙂

Here are some recipes using the haricot and its cousins to get you started, and see #YOTP for more on what’s happening this year.