Love Your Bike response to the Stretford Public Realm consultation

The Love Your Bike to the Stretford Public Realm consultation focussed on three main sections:

However, our overall impression is that it will be hard to achieve this objective when the proposed plans appear to be a public realm scheme with a ‘motorway’ running through the middle of it.

Love Your Bike would recommend that the scheme needs to be re-designed to focus on improving the public realm for people walking, cycling and using public transport.

The full Love Your Bike response is available (pdf) or is shown below.

There is still time to submit your comments and feedback on the proposed Stretford Public Realm scheme. Deadline is Friday 29 July 2016 to the project team. By Email: Mark.Ford@amey.co.uk, telephone: 0151 498 6659 or by letter: Amey, Unit 6, Matchworks, 142 Speke Road, Liverpool L19 2PH.

Air pollution is a serious problem in the UK with up to 40,000 people estimated to die prematurely each year and with equivalent annual health costs estimated to be up to £20 billion a year.  In March 2016, Tony Lloyd, the interim Mayor stated that “it is estimated that 2,000 people in Greater Manchester are dying prematurely each year from diseases and conditions affected by air pollution. We must take action to stop these deaths – doing nothing is not an option.”

On 27th April 2016, the Environment, Food and Rural Affairs Committee report on Air Quality described air pollution in the UK as a “public health emergency”. (Page 3)

Children are particularly at risk, with epidemiological studies for the World Health Organisation showing that symptoms of bronchitis in asthmatic children increase in association with long-term exposure to NO2.

In October 2013, the World Health Organisation’s specialised cancer agency classed outdoor Air Pollution as carcinogenic to humans in relation to lung cancer, and is classified as Group 1, signifying there is ‘sufficient evidence’ of a ‘causal relationship’.

Road transport is a major source of air pollution in cities, leading to a high proportion of the population being exposed to pollutant levels above EU and World Health Organisation standards.    In Greater Manchester road transport contributes 75% of emissions of nitrogen oxides and 81% of particulates. It also accounts for 32% of carbon dioxide emissions.   (Page 13, Source of the Problem)

The Greater Manchester Low Emission Strategy and Air Quality Action Plan that went to the GM Combined Authority meeting on 29th July 2016 recognises that: “Quite simply, a significant reduction in the number and length of journeys made by diesel and petrol-fuelled vehicles (especially those with EURO V or older engines), within Greater Manchester is required in order to achieve the necessary reductions in emissions.”  (Para 7.4. Emphasis added).

The National Planning Policy Framework (NPPF) also states in relation to Air Quality that the Planning system should contribute to and enhance the natural and local environment by “preventing both new and existing development from contributing to or being put at unacceptable risk from, of being adversely affected by unacceptable levels of soil, air, water or noise pollution or land instability”. (Para 109) 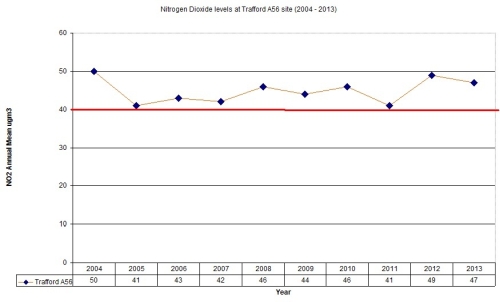 The chart above shows the Nitrogen Dioxide levels from the Trafford A56 sensor between 2004 and 2013 (the latest data available from the GreatAir website).  The red line is the 40ug/m3 European Union “annual mean” limit for Nitrogen Dioxide pollution.  It is clear that NO2 pollution levels have failed to meet the EU legal limits.

We would highlight the clarification provided by the European Commission relating to provisions contained within Directive 2008/50/EC namely that:

a) limit values must indeed be complied with throughout the territory of any given air quality zone, and compliance should not be determined nor assessed as an “average” of concentrations measured in different locations within the same zone.” (Emphasis added).

b) Unlike target values, which create an objective to be achieved “where possible” or “where not entailing disproportionate costs”, limit values create an obligation of result which is unconditional and absolute, irrespective of costs (Article 2, paragraphs 5 and 9).   (Emphasis added)

Put more simply, there is a responsibility to reduce air pollution levels in any area that is currently failing to meet air quality standards and not to rely on reducing the “average” figure across the air quality zone.

The Stretford Town Centre Masterplan 2014 states that policy objective MO11 aims to “address poor air quality and congestion along the A56.”   However, the documentation available for the Stretford Public Realm consultation  provides no information on what impact the proposed changes will have on traffic levels and air pollution in the scheme area.

The rationale for adding the 5th lane (the 2nd right turn into Edge Lane) is to “reduce congestion”.  However, it is unclear what impact the proposed 30mph speed limit and introducing multiple at-grade pedestrian crossings will have on traffic flow, congestion levels and subsequent air pollution from increased numbers of stationary vehicles with idling engines.

Recommendation:  An air quality impact assessment needs to be undertaken to identify what impacts the proposed road changes will have on air pollution levels in the scheme area.

Love Your Bike believes that most people would like to cycle more often, but just like the majority of people identified as “Interested, but Concerned” in research undertaken in Portland, Oregon,  they want safe and comfortable cycling routes before they will cycle regularly or allow their children to cycle.
“Riding a bicycle should not require bravery. Yet, all too often, that is the perception among cyclists and non-cyclists alike. No person should have to be “brave” to ride a bicycle; unfortunately, this is a sentiment commonly expressed to those who regularly ride bicycles by those who do not.”  (Geller, R (2006) Four Types of Cyclists)

We have recently updated our manifesto “Getting moving: a cycling manifesto for Greater Manchester” which has the support of national cycling organisations including British Cycling, CTC and Sustrans as well as a growing range of local businesses and agencies.

The manifesto contains five headline themes and 25 actions which we believe are required to help Greater Manchester become a cycling city and reach our goal of 20% of journeys under 5 miles being made by bike by 2020.

Designing our cycle routes to meet these criteria will be essential to ensuring that our routes meet the simple test outlined below:

“A bicycle way that is not safe for a 8-year old [or 80 year old] is not a bicycle way.” Enrique Penalosa, Mayor of Bogota [our addition]

The TfGM guidance also highlights the criteria for coherence which states: “the cycle route must be easy to find and intuitive to navigate; be consistent in quality; and offer route continuity and completeness” and also that  “it is not acceptable to leave gaps in cycle route provision” (Page 1, our emphasis).

The TfGM Cycle Design guidance also states that “where there is no realistic option to reduce general traffic flows and/or speeds and, in accordance with the core Vélocity 2025 objective of providing largely segregated cycle facilities to cater for the full range of cyclists, cycle tracks or cycle lanes with a safety buffer should be considered first and provided where it is viable to do so.” (Emphasis added Page 7).

The Stretford Public Realm consultation has not provided any information on any traffic reduction measures that are proposed for the area.  It is also unclear how far the proposed cycle lane facilities will extend beyond the Chester Road / Edge Lane / Kingsway junction.

The Stretford Town Centre Masterplan, published in 2014, states that one of the objectives of the Masterplan is to: “improve pedestrian and cycle routes through the area and access by public transport.” (MO12).

Love Your Bike believes that the bare minimum width advisory cycle lanes as proposed will not help meet this objective, do not meet the TfGM Cycle Design guidance and are not fit for purpose.

Recommendation: That the Stretford Public Realm plans be re-designed to provide protected cycle lanes extending along the A56 corridor and connecting with other desireable local cycle network routes.

The 2015 Stretford Public Realm Consultation document front cover presented an artists impression (see below).   Given the appealing scenario in the artists sketch –  with spacious winding pavements and hardly any motorised traffic – it is not surprising that 71% of respondents supported “replacing some subways with surface level pedestrian crossings”.  (Our emphasis). 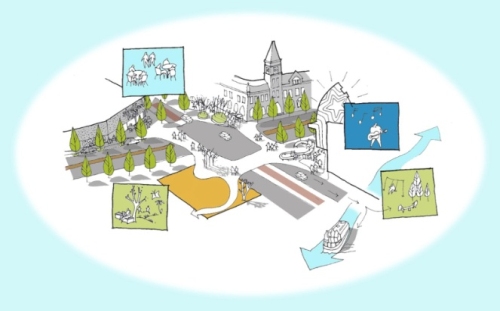 The reality of the proposed scheme is somewhat different. 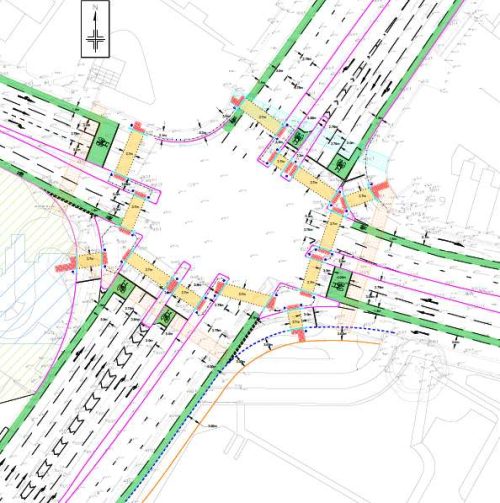 The road plan as proposed in 2016 consultation

The consultation documents state that removing the subway crossings will provide additional space for public realm improvements. However, from the proposed road plan it appears that the land area currently dedicated to the subway entrance/exits will be taken to provide increased space for motorised traffic. (see above).

The Stretford Public Realm Consultation documentation has not provided details of the amount of time that will be allowed (needed) to make these crossings by people walking or cycling.

(1) It is the duty of a local traffic authority to manage their road network with a view to achieving, so far as may be reasonably practicable having regard to their other obligations, policies and objectives, the following objectives—

(a) the more efficient use of their road network; or

(b) the avoidance, elimination or reduction of road congestion or other disruption to the movement of traffic on their road network or a road network for which another authority is the traffic authority;

and may involve the exercise of any power to regulate or co-ordinate the uses made of any road (or part of a road) in the road network (whether or not the power was conferred on them in their capacity as a traffic authority).

Unfortunately, it appears that many local authorities interpret this duty to secure the ‘avoidance, elimination or reduction of road congestion’ and securing and facilitating the “expeditious movement of traffic on road networks’ as only applying to motorised traffic.

We are concerned that introducing at grade pedestrian crossings will introduce significant delays for people walking and cycling who wish to cross Chester Road and who do not want feel comfortable or safe to cycle across the junctions.

For example, people attempting to cross to Stretford Mall from the Metrolink area will be required to cross 7 stages and 13 lanes of traffic.

Love Your Bike would remind Trafford Council and Greater Manchester Urban Traffic Control (UTC) that their obligation to securing and facilitating the “expeditious movement of traffic on road networks’ applies to all road users including people walking or cycling.

Removal of the subway underpasses brings little benefit and significantly reduces options for pedestrians and people on bikes who do not wish to cycle across the busy road junctions.

The TfGM Cycle Design Guidance also states that where “provided for cycle use, central refuges should be wide enough to accommodate waiting cycles and pedestrians safely. The target minimum island width for straight-across crossings is 2.8m, desirable minimum 2.6m and absolute minimum 2.4m (0.2m wider for speeds >30mph).”  We note that several of the currently proposed islands are shown with widths below the absolute minimum.  This will have impacts on people with “non-standard” bicycles – such as people cycling with child trailers, cargo bikes, tricycles or adapted bikes for people with disabilities.

Our overall impression is that proposed scheme will not help meet the Stretford Town Centre Masterplan objective of achieving a “comprehensive public realm and movement scheme that will make Stretford a more attractive and successful town centre.”  It will be hard to meet this objective when the proposed plans appear to be a public realm scheme with a ‘motorway’ running through the middle of it.

Love Your Bike would recommend that the scheme needs to be re-designed to focus on improving the public realm for people walking, cycling and using public transport.