Climate change is a threat to national security

Hurricane Irma, Hurricane Harvey and deadly monsoons in South East Asia – politicians need to wake up and treat climate change like a threat to national security.

Just imagine, for a moment, that the US and UK governments received an intelligence report suggesting that some foreign power was plotting to cause hundreds of billions of dollars’ worth of damage in our countries in the years ahead.

The result would be that we’d have to sacrifice much of Florida and East Anglia by the end of this century. 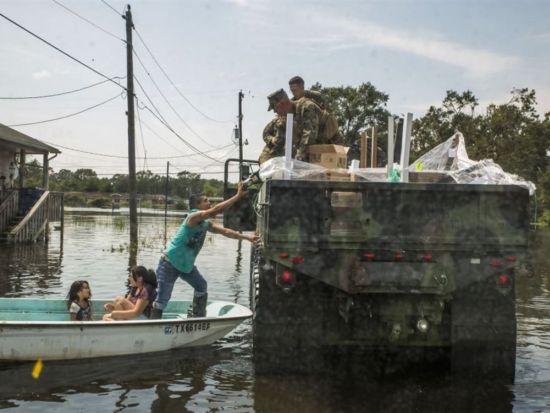 What if intelligence agencies suggested this same foreign power was also planning to attack other less well-off countries, putting hundreds of millions of lives at risk?

Imagine the media storm if that report was leaked to the press. How would we, the public, respond? How would we expect our politicians to act?

Would we be happy for our governments to come up with a plan that offered a 50/50 chance of slightly reducing the threat by 2050? No, we most certainly would not. We would expect immediate action, within days, and wouldn’t tolerate government attention on anything else (including Brexit) until the threat had been removed.

How would British newspapers react if our government not only maintained diplomatic and economic relations with that foreign power, but rolled out the red carpet, and offered it tax breaks and favoured trading status with the UK? There would be uproar, they would call for the government to be ousted immediately and probably for Churchill to be brought back from the grave.

The very real and immediate threat that climate change poses to hundreds of millions of people around the world is something we know about because of the dedicated work of tens of thousands of scientists.

And yet, curiously, it invites a very different response.

The appalling devastation caused in the Caribbean by super-charged Hurricane Irma, in Texas by Hurricane Harvey, and the thousands of people that have lost their lives and livelihoods because of unprecedented monsoon flooding in South Asia, are just a taste of things to come in a warmer world.

That’s why I was in the Arctic Circle in August 2017, with Friends of the Earth Norway, to lend our support to their campaign to stop plans for new oil and gas drilling in the beautiful Lofoten Islands.

Scientists estimate that of the fossil fuels that have already been discovered, we need to leave at least 80 per cent in the ground if we are to have any chance of avoiding the worst excesses of climate change. So why on earth would a rich country like Norway want to look for yet more of the stuff, especially in one of its most beautiful and sensitive stretches of coastline?

The clear and present danger that climate change represents is also why Friends of the Earth is working with communities to do all we can to stop fracking in the UK.

We need to be winding down our existing oil and gas infrastructure and moving to clean renewable energy as fast as we can – not creating a whole new fossil fuel industry that will lock us in to dirty energy for decades to come.

It’s also why we’ve opposed tax breaks being offered to fracking companies and oil companies in the North Sea, and why we’ve campaigned hard against plans for a brand new open cast coal mine at Druridge Bay, on the beautiful Northumberland coast.

There are days when it seems just absurd to me that we’re having to do this, in 2017, given all the scientific evidence.

But what gives me strength is knowing that we’re part of a growing global movement, working alongside Friends of the Earth groups in 75 countries, to speed the transition from the fossil fuel age to the clean, green renewable age.

And you are a vital part of that movement. Thank you.

Join the Climate Day of Action on 14 October