If you were out early this morning, you may have spotted some Great Britons being decorated with alternative ‘CBE’ medals around the country.

Here in Manchester, we presented John Dalton and Queen Victoria with the awards to mark a new link-up between Friends of the Earth and the UK’s only specialist green energy providers, Good Energy and Ecotricity, aimed at boosting clean British power. 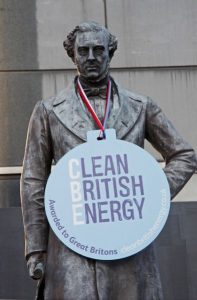 Members of the public are being urged to back the campaign – and show their support for renewable power by switching their energy supply to one of the two suppliers – at the campaign website www.cleanbritishenergy.co.uk.

The Clean British Energy campaign calls on the Prime Minister to cut carbon emissions and create new jobs and industries by supporting home-grown energy from the wind, sun and water. Recent polling by Friends of the Earth shows 85 per cent of people in the UK want Cameron to ditch dirty, imported fossil fuels in favour of renewable power sourced in the UK.

Friends of the Earth’s Head of Campaigns Andrew Pendleton said:

“The people who have received medals today played a part in making Britain great and David Cameron has a chance to do the same – his Energy Bill should switch the country to clean British energy and put our country at the forefront of this new industrial revolution.

“Our research shows that most people want more of their electricity to come from renewable energy – not dirty and expensive imported fossil fuels.

“That’s why we’re asking people to seize back power from the Big Six energy firms by switching to a clean electricity supplier like Good Energy or Ecotricity.”

“The Big Six energy companies focus on short term profits at the expense of long term thinking and what Britain actually needs – which is a massive investment in home-grown sources of energy – clean, green energy made in Britain.

“This campaign is about giving voice to the vast majority of Britons who want our energy companies and our government to take the long term view and do what’s right for Britain.”

“Renewable energy sourced in the UK is better for our energy security and will lead to lower and more stable prices in the long run.

“People need to send a strong message to the government that they’ve got a once-in-a-lifetime opportunity to get this right; if they blow it we’ll be tied into gas and expensive nuclear and prices will continue to spiral higher.”

Tell Energy Secretary Ed Davey to switch our UK power supply to renewable energy and earn yourself a nomination for your very own ‘CBE’: