Shell, Clean up your mess in Ogoniland

Two years ago, the UN’s Environment Programme (UNEP) handed Shell a report detailing the devastation caused by the oil company’s operations in Ogoniland and listing measures it should take to clean up this mess. Guess what? Two years later not one of these recommended measures has been implemented.

In the report – ‘Environmental Assessment of Ogoniland’ – the UNEP said that Shell was not properly cleaning up oil that had leaked from its pipelines and other facilities. According to UNEP, Shell’s conduct in Ogoniland so far is “not leading to  environmental restoration nor legislative compliance, nor even compliance with its own internal procedures”.

Oil pollution has devastated the environment and the livelihoods of farmers and fishermen in Ogoniland. The UNEP recommends that Shell, other oil companies, and the Nigerian Government set up an Environmental Restoration Fund for Ogoniland with an initial capital injection of USD 1 billion. Other recommendations include an overhaul of Shell’s utterly inadequate approach to cleaning up Ogoniland and a decommissioning of abandoned oil facilities. Shell needs to get to work to clean up its mess now! 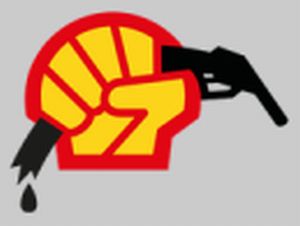 Shell is the largest foreign oil company in Nigeria – the oil giant has been drilling oil in the Niger delta for decades – with catastrophic consequences for the environment and the people. Ogoniland, a region in Southern Nigeria, is most heavily contaminated by oil: oil leaks have contaminated water bodies and formerly fertile soils and the ecosystem of the mangrove forests suffers heavily from the oil pollution.

However, so far, Shell has done barely anything to restore the ecosystem of Ogoniland: many fields, rivers and lakes are still covered by layers of oil. Fish farming, for many their main source of income, is in many places impossible. It is high time that Royal Dutch Shell does everything possible to increase the speed and efficiency of the clean up of Ogoniland.

Ask Shell to clean up its mess in Ogoniland. Please send a message to Shell CEO Peter Voser.