Friends of the Earth heaps on the Peer pressure

Friends of the Earth staff, led by their very own mock Peers, continue the push for carbon targets ahead of the vital House of Lords vote on 28 October.  Clad in flowing red robes rimmed with fake ermine fur, our green-blooded Lords cast their own vote for a clean power target in a practice run outside the Houses of Parliament. They were joined by volunteers from Greenpeace, RSPB and Stop Climate Chaos all urging Peers to “#vote4cleanpower” on 28 October. 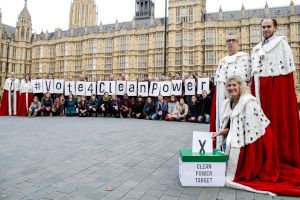 The alliance of environmental groups is calling for a commitment to clean energy to be included in the Energy Bill which is currently being debated in the House of Lords. We believe a target to remove almost all of the carbon from our power sector by 2030 is necessary to move away from polluting fossil fuels.

Last June the coalition Government voted down an amendment to the Energy Bill that would have introduced the clean energy target we need. MPs from all parties supported the amendment, but the Government won out with a slim majority.

But the House of Lords has the power to resurrect a target when they vote on the Bill on 28 October. The Government doesn’t have a majority in the House, and there are signs that they are preparing for a possible defeat.

Friends of the Earth Energy Campaigner Oliver Hayes says: “We face a once-in-a-generation opportunity to wean the UK off dirty, expensive fossil fuels and kick-start a clean energy revolution. A clean power target in the Energy Bill would encourage long-term investments in clean energy firms across the UK, creating thousands of jobs and helping slash carbon emissions.

“In June we came close to winning a target in the House of Commons, and now reports say the House of Lords looks set to overturn that defeat – if enough Peers turn up to vote. Peers must pledge to vote for clean power on 28 October, and help make history in the process.”