So how much do ‘green levies’ add to the average household energy bill?

This week the Chief Executive (CEO) of Scottish & Southern Energy (SSE) called for a review of the government’s green energy levies. A call quickly taken up by Dabid Cameron, the Prime Minister. This followed SSE’s announcement of an average 8.2% increase in household energy bills – closely followed by a British Gas announcement of an average 9.3% increase in energy bills from November.

However, what any review would find is that just 9% of average household energy bills are due to these green levies. And over half of this money is used to pay for measures to keep the poor and elderly warm. The bulk of household energy costs are dictated by the cost of wholesale fuel, and investments in upgrading network infrastructure.  See the graphic below (Courtesy Paul Scruton – The Guardian). 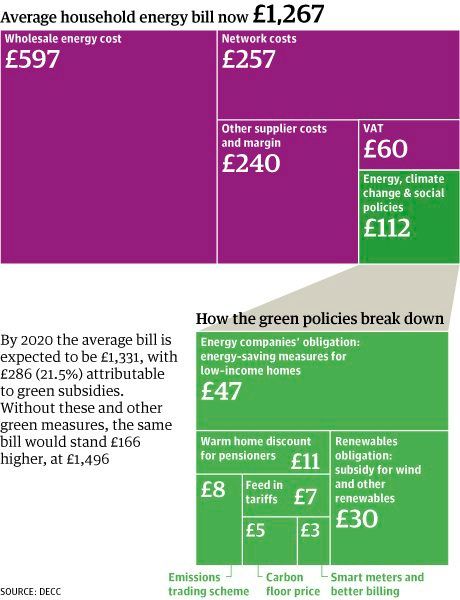 28 October: a vote for clean power

For two years the debate has raged about whether Britain will switch to a clean energy system, powered by the wind, sun and waves, or continue on a fossil-fuelled path towards climate chaos. Our campaign for a 2030 ‘decarbonisation target’, the vital measure that would drive the move to clean power, has been at the centre of it.

The Government’s independent climate advisors – the Committee on Climate Change (CCC), an expert body established under the Climate Change Act – say the target is essential in order to meet our climate goals in the most cost-effective way. They are very clear: without changing our energy system, we can’t stop our climate from changing.

And on 28 October, we’ll see whether the House of Lords agrees with the CCC when they vote on whether to include a clean power target in the Government’s Energy Bill.

More details on the Friends of the Earth blog.