Campaigners call on Salford Council to say ‘No fracking IN Salford’

On Tuesday 8th April, Ali Abbas, the originator of the petition calling on Salford Council to say No to Coal Bed Methane and Shale Gas (Fracking) at Barton Moss and anywhere else was given 5 minutes to address the Salford Council Cabinet committee.  This was as a result of the petition being signed and supported by over 3,000 people who live, work or study in Salford.  See below for Ali’s presentation….. 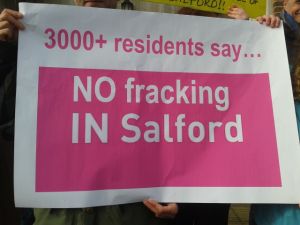 Thank you for inviting me to address you this morning.

I’m here as one of more than 3,000 people who live, work or study in Salford who signed a petition calling on the council to oppose fracking and the extraction of unconventional gas, such as coal bed methane and shale gas, because of the unacceptable risks to neighbouring communities, the climate and the local environment.

What I’d like to do today is to challenge some of the claims made by the industry, highlight the risks of unconventional gas, and explain what action we’d like you, as the Cabinet of Salford City Council, to take.

Supporters of unconventional gas claim that it will bring down prices, improve energy security, create thousands of jobs and tackle climate change. However, these claims do not stand up to scrutiny.

While it’s true to say that fracking has brought down energy prices in America, there’s no evidence that this would be the case in the UK. Even the Chairman of Cuadrilla, Lord Browne, acknowledges (and I quote) that shale gas “is not going to have a material impact on prices” in the UK.

Some people are concerned about an energy crunch in the next few years, and claim shale gas is the answer. That’s simply not the case. Centrica admitted in January that it would be at least a decade before the UK saw any shale gas production. By far the best way to tackle fuel poverty and reduce our dependence on imported gas is to reduce our dependence on gas, by wasting less energy and generating more of it from renewable sources.

But what about jobs? Investing millions of pounds in any industry will create jobs, but experience in the US shows that industry claims are often overstated, and the negative impact on other sectors such as agriculture is never mentioned.

Also, many of the jobs associated with unconventional gas go to teams of transient workers who move from well to well, rather than to local people, who are left with the unskilled, low-paid jobs.

Energy efficiency and clean energy provide a much more positive vision for jobs in Salford – there are already over 34,000 people employed in the low carbon sector in Greater Manchester, and there’s huge potential to build on this and develop a supply chain that Salford workers can benefit from.

Some people claim that unconventional gas will help tackle climate change. That’s simply not the case. Even if it turns out that burning shale gas emits less carbon emissions than coal (and that’s by no means certain), it’s still a fossil fuel. 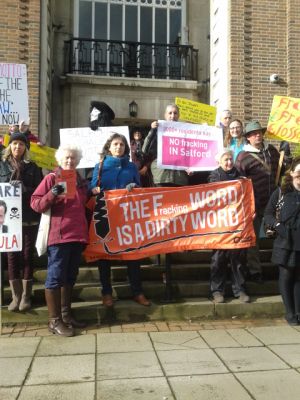 Professor Kevin Anderson from the Tyndall Centre is clear: “shale gas exploitation and use are not compatible with repeated obligations on 2 degrees C”.

And at a local level, unconventional gas will make it incredibly difficult to meet our target to cut Greater Manchester’s emissions by 48% by 2020.

As well as putting us on the path to climate catastrophe, unconventional gas also poses serious risks to the local environment and human health.

Industry figures from America show that 6% of fracked gas wells leak immediately, and 50% within 30 years. And it’s not just leaking wells we need to worry about – it’s all the other related activities too, such as transporting the chemicals used in the drilling process and disposing of the contaminated wastewater.

There are also serious concerns about air pollution, especially here in Greater Manchester where we’re already breaching EU air quality standards. Communities living near coal bed methane sites in Australia have complained of respiratory problems, rashes and irritated eyes, and monitoring of air quality near fracking sites in Colorado found 35 pollutants that affect the brain and nervous system, some at levels which could harm unborn children.

And these risks are already starting to have a negative impact on house prices and sales in Lancashire. Residents in the Fylde say buyers are being deterred both by environmental fears and the prospect of living close to drilling sites with significant levels of both noise and traffic.

The Government says things will be different here in the UK because we have tougher regulations, but we also know that tough regulation is only effective when it’s strictly enforced – and the swingeing Government cuts to local authorities and the Environment Agency raise serious concerns about capacity for enforcement.

Tough regulation can only make the industry safer – it can’t make it safe.

And can we trust companies like IGas to keep us safe? IGas told you they were exploring for coal bed methane at Barton Moss, but their recent stock exchange announcement shows they were intending to explore for shale gas all along.

And local residents living near the site have sought meetings with IGas yet been refused, while the community liaison meetings are held in private and minutes kept secret.If we can’t even trust IGas to be open and honest about the initial exploration phase, how can we trust them in the future?

And there are many other questions that we don’t have the answers to: What happens if regulation fails? Who would pay to clean up contaminated ground or surface water? Would it be done quickly enough to avoid long-term harm? Who would be responsible for monitoring any leaks from a well that has already finished production? What if, as has happened in the US, a company that owns the well goes bankrupt?

In conclusion, given all the risks and uncertainties around fracking and coal bed methane, we call on Salford City Council to pass a motion adopting a presumption against unconventional gas extraction in line with the precautionary principle and climate change commitments.

The people of Salford have given you a clear democratic mandate – not just the 3,000 who signed this petition, but also the 80% of local residents who said no to fracking in a door-to-door survey of communities near Barton Moss. 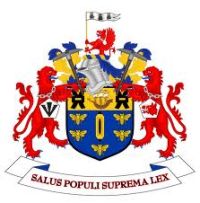 The motto on Salford’s coat of arms reads “SALUS POPULI SUPREMA LEX” – the welfare of the people is the highest law. We urge you to act.