In October 2012, Friends of the Earth raised serious concerns about the changes to the planning system proposed in the Coalition Government’s Growth and Infrastructure Bill.

Friends of the Earth’s briefing on the Growth and Infrastructure Bill concluded that: “The centralising effect of this Bill is in stark contrast to the Government’s stated localism agenda. There is no evidence to suggest that planning is the cause of the economic difficulties, and the continuous reform is undermines public confidence in and the legitimacy of the system. The Government needs to rethink the proposals and concentrate on a stable system that is fair, democratically accountable and delivers for the whole community as well as meeting environmental commitments. Friends of the Earth will be calling for changes to the Bill during the parliamentary process.”

In its submission to the House of Commons committee that was scrutinising the legislation, Friends of the Earth recommended that “clause 1 in particular should be deleted and not rushed through. There should be a proper consultation period, gathering of evidence and consideration of the impacts of such a clause, and what results might follow. Measures such as skills, resources, funding and financing should be proposed and consulted on instead to address the housing issue.”

As part of our campaigning to try and get the Government to remove Clause 1 from the proposed legislation, Manchester Friends of the Earth encouraged local people to send the following letter to Eric Pickles MP, Secretary of State for Communities and Local Government (DCLG).

I am deeply concerned that the Government is planning to ignore local democracy and community voices in the attempt to fast-track developments for economic growth.

The Growth & Infrastructure Bill gives you as Secretary of State more planning powers to bypass local council decisions.  This completely undermines the principle that planning is based on consent, and runs the risk of only economically benefiting a few developers instead of the many communities across England.

I urge you to show your commitment to localism by deleting clause 1 of the Bill, which allows developers to bypass local authorities and make planning applications directly to the Secretary of State.

Before the Bill progresses any further, I also call on you to run a public consultation, perform an Equalities Impact Assessment, and ensure that any planning reforms take climate change and the wider environment into account.

A standard response letter was posted on the DCLG website. 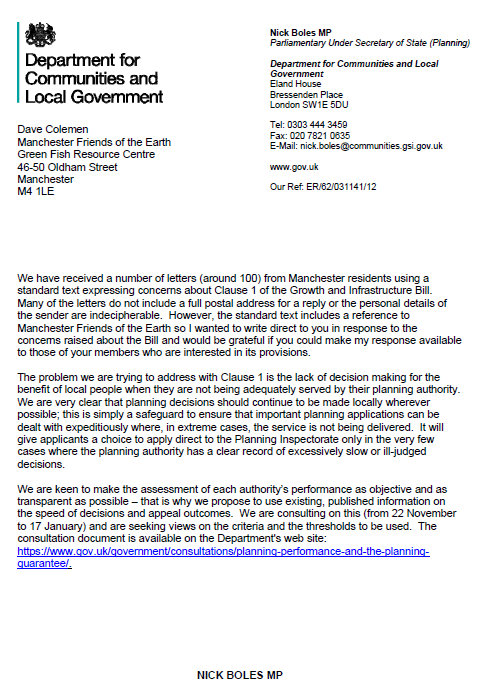 In the letter, Nick Boles (Parliamentary Under Secretary of State for Planning) argued that:

“The problem we are trying to address with Clause 1 is the lack of decision making for the benefit of local people when they are not being adequately served by their planning authority. We are very clear that planning decisions should continue to be made locally wherever possible; this is simply a safeguard to ensure that important planning applications can be dealt with expeditiously where, in extreme cases, the service is not being delivered. It will give applicants a choice to apply direct to the Planning Inspectorate only in the very few cases where the planning authority has a clear record of excessively slow or ill-judged decisions.”

One of our key concerns was that this legislation would mean that decisions on planning applications on controversial issues, such as fracking for shale gas, would be taken away from local councils.

Unfortunately, the Growth and Infrastructure Act was voted through, complete with Clause 1, and became law in April 2013.  However, as a result of the campaigning activities of Friends of the Earth and many other organisations, the Government announced in June 2013 that local councils would continue to make any planning decisions on shale gas production.

In the Friends of the Earth’s press release welcoming the decision, Energy Campaigner Tony Bosworth said: “The concerns of local people about the impact of fracking locally and globally must be fully heard.”

Since the election in 2010, the Government has made sweeping changes to the planning regulations and guidance, and in many cases weakening the impact of environmental concerns within the planning system.

For example, the recent draft National Policy Statement for National Networks is seeking to lower the planning bar for new road schemes by removing the increase in CO2 emissions as grounds for objection.

Friends of the Earth will continue to campaign to strengthen the planning system regulations to protect the environment and meet our climate change obligations.  Watch this space…!

P.S.  There are loads of helpful guides to the planning system on the Friends of the Earth website (search for “planning”), including: