July meeting: Dig the City, Run on Sun and Use Your Loaf…loads happening and celebrations too!

July’s full group meeting unveiled lots of events and activities coming up in the next few months!  Read on for a brief summary by Stephanie.

Manchester’s largest urban garden festival – Dig the City – is hitting the streets from the 2nd – 10th August and Manchester Friends of the Earth are looking for volunteers to help out in their bee friendly paradise.

Safia from the Manchester FoE food group introduced Diana, the new Food Campaign Lead,  to the group and also explained what their new campaign ‘Use your Loaf’ is all about. This campaign will be launched in th Autumn, so if you are passionate about sustainable food, get involved!

Run on Sun is Friends of the Earth’s newest campaign and it is designed to get more schools running on clean energy (and save money at the same time!) by asking the government to re-think how they fund infrastructure. At the moment, school’s can get a loan for insulation but not solar panels. Therefore many schools cannot afford the initial costs. There will be plenty of opportunities to get involved with this campaign at Dig the City and other events!

It has been a busy year so far for Manchester FoE with fracking protests in Barton Moss (and now Davyhulme!), Bike Month Mcr, numerous stalls at events and Basecamp. However, September is going to be the busiest month yet!

The meeting finished with a celebratory glass of prosecco on achieving this year’s Earth Movers “Group of the Year” award. 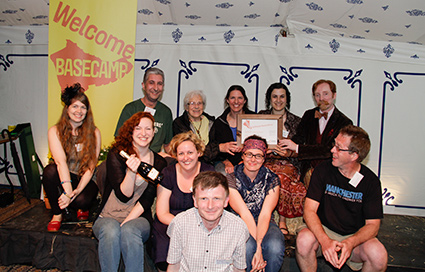 A big well done and thank you to everyone who has been involved in Manchester FoE’s campaigns.

If you would like to get involved in any of Manchester Friends of the Earth’s events and campaigns please contact us via the website or email office@manchesterfoe.org.uk