Letter: Why don’t you know enough about fracking? (Why did Trafford Council duck the issue?)

See below for the text of a letter published in the Manchester Evening News on Friday 18th July following the Trafford Council meeting where the Conservative Group blocked the discussion of motion on fracking (the full text of the motion is provided at the bottom of this page).

I went to a Trafford Council meeting on Wednesday evening to listen to councillors debate a motion on fracking. Only they didn’t. The motion was last on the agenda and when it finally came up for discussion, the Conservative group used an obscure regulation to postpone the debate until the autumn because they claimed not to have enough information.

Isn’t it strange how they had enough information to debate motions on apprenticeships, universal credit and taxi deregulation, but not enough to discuss an issue like fracking which has been all over the news for months and presents a real and present threat to Trafford residents, the climate and the local environment.

And as they clearly never had any intention of debating this important issue, they could at least have had the common decency to announce it at the start of the meeting instead of making all of us in the public gallery sit through two hours of petty political point-scoring only to find out our evenings had been wasted.

Is it any wonder people are put off politics when we are treated with such contempt by those we have elected to represent us? 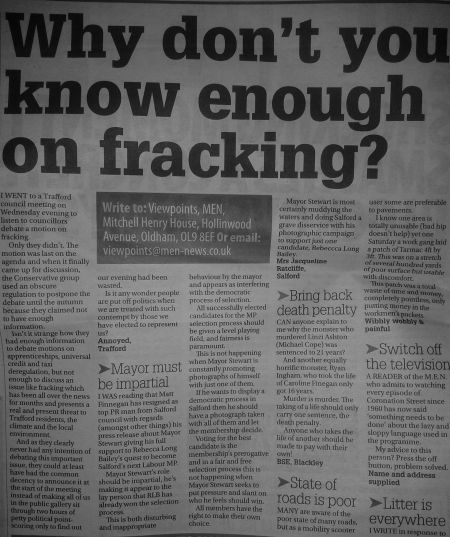 This Council opposes changes to the trespass laws in the Queens speech which will allow companies involved in fracking, which pumps water and chemicals in to shale rock deep underground to release methane gas, to drill under homes without needing permission.

These laws hastily changed at the same time as a recent poll showed 75% public are opposed to fracking.

Public concerns raised include risk of earth tremors, contamination of ground and surface water, release of greenhouse gases and noise pollution for residents living in the vicinity.

All these are genuine concerns, whilst at the same time it is recognised that the most optimistic forecast suggest that shale drilling could meet no more than 10% of European gas demand by 2030. The fact is the long term damage to our environment is irreversible as we see now in America with hundreds of abandoned wells.

We strongly believe we should be listening to the views of local people and the evidence in relation to health and safety and that our duty as a council is to protect the health and wellbeing of our residents and oppose fracking and coal bed extraction of methane gas in Trafford.