This morning, volunteers from Manchester Friends of the Earth joined campaigners from Fair Fares Now and the RMT and TSSA unions to protest against the introduction of evening peak fares. 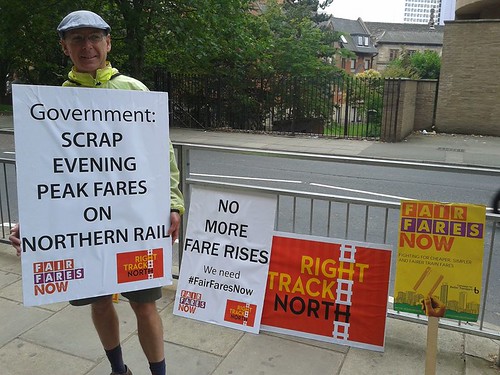 From today, passengers travelling between 4pm and 6.30pm on Northern Rail services across the North of England will have to pay peak fares, which in some cases can be more than twice as expensive as off-peak tickets.

The introduction of evening peak fares was announced last month after the Department for Transport called on Northern Rail to raise extra revenue from its franchise so that the Government can reduce the subsidy it pays.

While this change won’t affect commuters who travel in the morning peak, it will disproportionately hit part-time and shift workers, who are often those on the lowest wages and least able to afford the extra cost.

And introducing higher fares and extra complexity is exactly the wrong message to be sending when the Government should be encouraging more people to use public transport in a bid to tackle congestion, air pollution and climate change.

It’s not too late to get the introduction of evening peak fares reversed.  You can support the campaign by signing the Campaign for Better Transport’s petition, and by contacting your MP.