Our visit to Pomona Island

Does the name Pomona Island mean anything to you?

Unless you are an observant commuter on the Metrolink travelling through Cornbrook, or a dog walker in Old Trafford, you probably haven’t noticed this hidden wildlife haven between the Bridgewater Canal and the Manchester Ship Canal, writes Damian.

Manchester FoE’s full group meeting in September was devoted to exploring Pomona’s secrets. Wildlife expert and Let’s Do It litter campaign coordinator Dr Luke Blazejewski took us on a guided tour of the island on a fine sunny evening, starting off by slipping through the fence by Cornbrook tram stop! As we soon found out, the area is owned by property giant Peel Holdings, who paid for the (famously under-used) Pomona station on the Eccles line to service a property development on the island that has remained on the drawing board. Nevertheless, Peel come back every now and then to clear scrub from Pomona, and we could see the stumps of willow trees here and there in the brush.

However, there are still areas of untouched wild vegetation, and although it was quite late in the year there was still a lot of rosebay willowherb on Pomona. Most people will have seen this plant, with its purple flowers, but few will have found out it is actually edible—the stalks have been used as an asparagus substitute in the past and the leaves are edible as well (just remember to pick them from a young plant that hasn’t yet flowered). We found another foragers’ favourite, rowan berries, but Luke said it would be better to wait for the first frost to break down the bitter taste before gathering any. You could, however, just put them in the freezer with the same results. 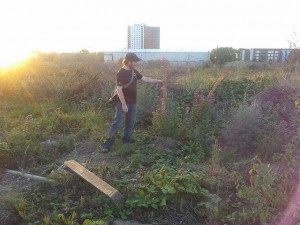 Dr Luke Blazejewski shows us some rosebay willowherb in flower

There was also a burnt area where someone had tried to get rid of the extremely invasive Japanese knotweed by fire, but with mixed results. This plant is notorious for being impossible to remove, and there were still plenty of stalks that had survived the blaze. A poisonous fly agaric mushroom gave a splash of colour to the cinders.

As it was quite late in the day when we went on our tour—the sun set behind Salford Quays soon after we arrived—there wasn’t much in the way of bird life, apart from a couple of swans on the Ship Canal. (By the way I can reveal that on my previous visit in July, during the day, a pair of kestrels flew over the island and some cormorants were perched on lamp posts on the Salford side. In the summer you can apparently also see the whitethroat, a little warbler that likes wild areas with undergrowth.)

Unfortunately it was soon time to leave Pomona, as darkness came and the full moon rose around 8.15. Hopefully the island will remain undeveloped for a while yet, and you can have the opportunity to discover Pomona for yourself! You can also get there from Pomona station, or via the Woden footbridge from Salford.