On Thursday 4th December 2014, cycle forum members were invited to a briefing meeting to look  at the proposed signage for the ‘cycling provision’ at the Southmoor Road / Altrincham Road junction in Wythenshawe which has already been built as part of the Metrolink route to the Airport.

This was the first time that any of the cycling organisations had seen the actual designs which have already been installed.  Love Your Bike was dismayed at the designs and is seriously concerned that Metrolink have made the road junction less safe for cycling and have also installed a so-called ‘safe alternative’ that is not easy, convenient or intuitive to use.

The Statement text is shown below. If you would like to add your support for the statement please email us your name and location (e.g. Wythenshawe, Bolton etc) and details of any organisation (that you represent) to gmloveyourbike@gmail.com

We would also like to hear about people’s experience of cycling along/across tram tracks in Greater Manchester.  Please send details of your experience (good or bad) to gmloveyourbike@gmail.com

The following photographs and diagram highlight some of our concerns with the junction design. 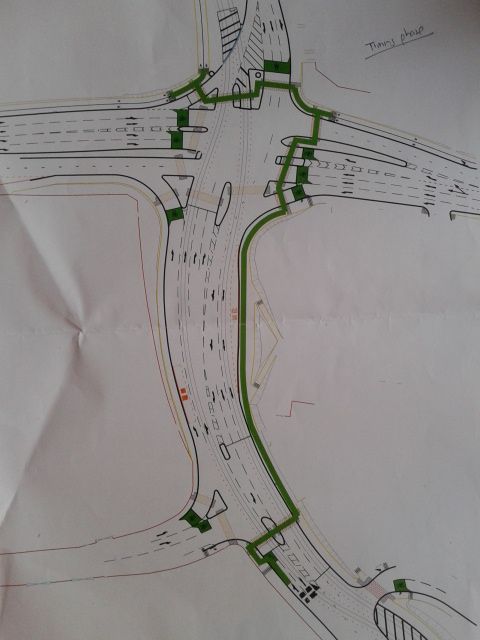 The diagram to the left shows the layout of the Southmoor Road – Altrincham Road junction and Metrolink route to/from Manchester Airport that has been installed.

The green line shows the so-called ‘safe alternative’ route that people wishing to cycle from Southmoor Road to Moor Road (or the other way) are supposed to take. This route crosses 7 Toucan island crossings.

Anyone wishing to cycle from Southmoor Road across Altrincham Road (from bottom of diagram to top) will be sandwiched between a left turning lane with only 1.2 metres from the white line separating the traffic lane and the first tram line. 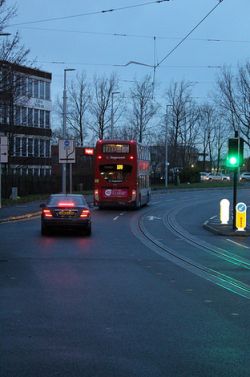 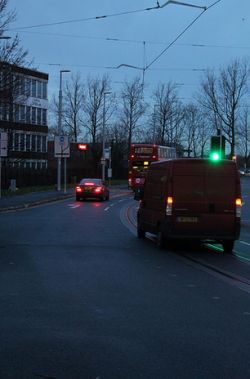 Once across the traffic light junction you will then need to cross at a shallow angle the tram lines as they go off to the left and the traffic lanes veer to the right.

If you are attempting to cycle the other direction from Moor Road (top to bottom of layout diagram) the pavement buildout at the top of Southmoor Road will force you (and all the other traffic) out towards the tram lines. 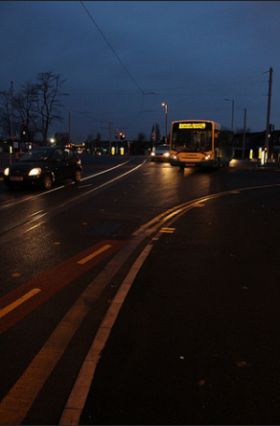 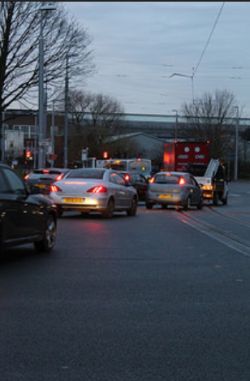 You may then have to pass between a bus parked in the bus stop, a tram line and 2 lanes of traffic trying to merge into one lane behind you.  Good luck! 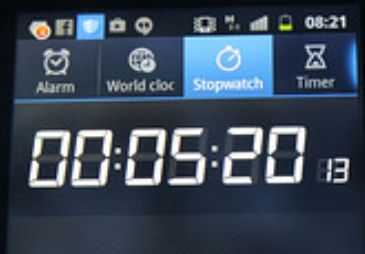 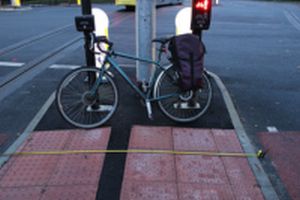 According to Metrolink, people wishing to cycle across this junction should use the ‘safe alternative’ (see the green route marked on the layout diagram).  At approx 8.15am on a weekday morning it took 5 mins and 20 seconds to cycle aong this route – from Southmoor Road (bottom of diagram to top) to Moor Road the other side of Altrincham Road.

In addition, two of the Toucan islands are not wide enough to safely accommodate a bicycle and child trailer/buggy.

Love Your Bike believes that cycling provision that is not easy & convenient to use and is not intuitive to understand will not be used by many of the people who choose to cycle and therefore does not provide a “safe alternative”.

It is hard not to agree with the claim from Shane Sutton (previous British Cycling coach) that tram lines around Manchester are “death traps”.

2) Also notes that many Manchester residents already use cycle routes through Trafford Park and to Media City and that funding has been secured to build the Trafford Park Metrolink line.

4) Calls on Transport for Greater Manchester, Metrolink and its project contractors to ensure that:

a) remedial measures are taken to improve the cycling infrastructure provision along existing Metrolink routes;

b) future Metrolink routes, such as Trafford Park, must be designed to meet the TfGM Cycle Design guidance which outlines the 5 key criteria “for successful and effective cycling infrastructure”, namely: safety, coherence, directness, attractiveness and comfort.

c) the cycling organisations in Greater Manchester are involved from the beginning of the design process.

This statement is supported by the organisations listed below:

[2] Is this Dangerous? (Eccles New Rd in Salford) Manchester Wheelers.