URGENT: Ask your MP to back fracking moratorium

On Monday, MPs will be voting on a series of amendments to the Infrastructure Bill, including one to introduce a moratorium on fracking.

This is the perfect opportunity to call a halt to the Government’s reckless and irresponsible pursuit of unconventional gas, which poses a grave threat to people’s health and the environment. 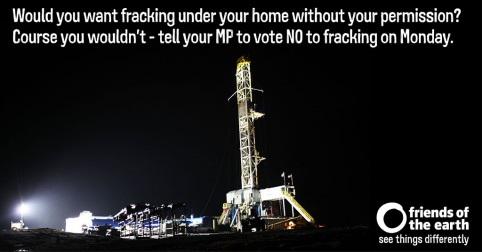 Whatever the party of your MP, please take, and share, this action asking them to vote in favour of a frack free UK on Monday:

Do you have a Labour MP?  If so, please could you give their office a call?  There are rumours Labour might change their position on fracking to back a moratorium, which would make a huge difference to our chance of keeping the UK frack free.

You can find your MP’s contact details at
http://www.parliament.uk/mps-lords-and-offices/mps/

Just give their office a ring, say you’re a constituent, that you think fracking is a terrible idea, and that you’d like them to back a moratorium on fracking by voting for amendments NC9 & 68 in the Infrastructure Bill debate on Monday.

If you’re on Twitter, why not tweet your MP and ask them to back a moratorium on fracking by clicking on their name below:

If your MP isn’t listed, they’re not on Twitter – why not give them a call instead?