A year ago this week, the tranquil calm of the Paraguayan community of Luz Bella was shattered by the sound of rubber bullets and acrid clouds of teargas. Police were firing on demonstrators, mostly made up of local farmers, leaving 16 injured and many more suffering the effects of gas inhalation. The cause of the confrontation – soya.

Luz Bella is a community in the frontline of a massive wave of soy expansion. It’s sweeping the country. Worsening deforestation and displacing rural communities who flee the toxic legacy created by pesticide-dependent GM soy crops.

In the case of Luz Bella, a Brazilian farmer had plans to clear 80 hectares and plant soy. Faced by community opposition, his heavy machinery moved onto the land escorted by riot police. In Paraguay this is not a rare event. The use of security forces to accompany soy growing is becoming increasingly common as communities stand up to the onslaught of soy. Paraguay’s government is keen to promote economic growth and big business, whatever the cost to people and the environment. 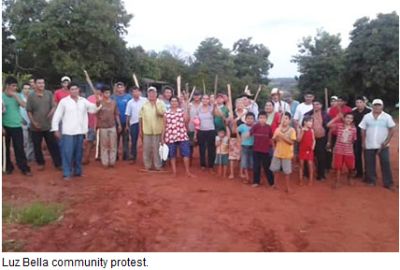 Friends of the Earth has been working alongside a number of small rural communities. We’ve provided legal training to help them confront powerful business interests, weak state regulation, and a corrupt judiciary. And we’re supporting the development of agro-ecological production in these communities to provide healthy, affordable food, protect the environment, and create an economic lifeline for embattled small farmers so they don’t have to sell out to the soy growers.

In Luz Bella the community has become galvanised. They’ve established an agro-ecology school to train young people in sustainable farming, giving them a viable economic future. Their persistent lobbying has finally persuaded the Paraguayan authorities to begin prosecuting lawbreakers guilty of illegal deforestation, or pesticide misuse. And they’ve become spokespeople for threatened communities across the country, through innovative use of community radio and Facebook. 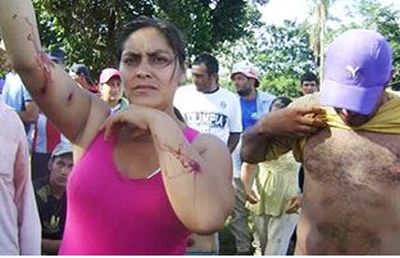 One year on from the violence, the community of Luz Bella have chosen to mark the anniversary. They’ve released photos of the repression on Facebook, including a grainy video capturing the moment events took a turn for the worse, and police started firing on demonstrators.

Take a look at Luz Bella’s community radio Facebook page and a video of the confrontation captured by a community member on their mobile phone.

Receive exclusive updates and video blogs by partnering me, Nick Rau. Your support will help us to protect Paraguayan small farmers, and the rivers and forest they depend upon.