What is your experience of cycling across Metrolink tram tracks?

We have launched a survey to collect experiences of people who have cycled alongside, close to or across Metrolink tram tracks in the past three years. If this applies to you, please take the survey. 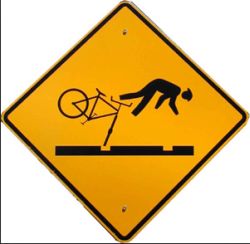 In December 2014, Love Your Bike again raised concerns regarding the designs of Metrolink tram routes at road junctions such as Southmoor Road in Wythenshawe.  Our concerns followed on from those raised by Sean Sutton (the British Cycling Head Coach at the time) who described the new tram lines near to the Velodrome as ‘death traps‘.

In February 2015, Love Your Bike campaigner recieved a response to a Freedom of Information Act request submitted to Transport for Greater Manchester (TfGM).  Whilst, the number of reported incidents is still quite low, there has been a three-fold increase between 2013 to 2014 in both the number of incidents reported and the number of claims submitted for injuries and/or damages.

Love Your Bike is concerned that there have been a number of incidences where cyclists have crashed or been injured when cycling close to/across Metrolink tracks.  But from anecdotal discussions it seems that many people have not reported these incidents.

We have launched a survey to collect experiences of people who have cycled alongside, close to or across Metrolink tram tracks in the past three years.

If the design of Metrolink tracks, particularly at road intersections, puts cyclists at risk, we want to highlight this problem and work for improvements.

Please send the survey link to any of your friends, family or cycling organisations that may have experienced issues when cycling on/around Metrolink routes. Any information you provide will remain confidential (unless you tell us otherwise). We will publish a summary of the survey findings.