The rise and fall of a Zombie Car Park!

In May 2013, the Manchester Evening News reported on “Calls for brakes to be put on ‘zombie’ car parks” in Manchester.  A ‘zombie car park’ is the nickname given to long-term ‘temporary’ car parks, that thrown up on the sites of demolished buildings or patches of undeveloped and desolate plots.  The MEN article was referring to the ‘temporary’ car park that sprung up on the old BBC site on Oxford Road.

Earlier in 2013, on April 11th the Dobbins on Oldham Street building caught fire. By May 21st, 6 weeks later the steel framed building had been demolished, the ground roughly levelled and heaps of black ‘tarmac’ layed. Parking signs and meters followed and hey presto a few days later it was open for car parking business.

One distinguishing feature of a Zombie Car park is that no official planning applications are submitted before the car park starts operating. The operator submits a retrospective planning application for a change of use of the site to a ‘temporary’ car park and hopes the Council will let ‘sleeping dogs’ lie.

But not this time. In June 2013, a group of concerned residents created a temporary green space – to reclaim the zombie car park. 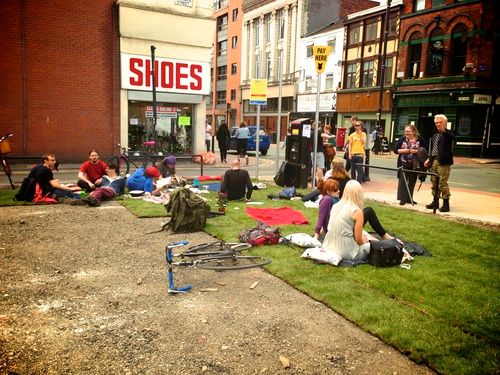 ParkStarter is an initiative to reclaim poorly used urban spaces, starting in Manchester.

Finally, in November 2013 the operator got round to making a retro-spective planning application (103101/FO/2013/C2) which was considered by the Manchester City Council Planning & Highways Committee meetings in January and February 2014. The recommendation from planning officers was to “approve”.  Manchester Friends of the Earth submitted a detailed briefing to all planning committee members why Manchester Councils’ own transport, air quality and environmental policies meant they should refuse the application.  Basically, increasing the number of car parking spaces would encourage more people to travel by car, more cars, more congestion, more air pollution.

And they did!  But the saga does not end there.  Like any good zombie, and despite not having planning permission, the car park lurched on munching car parking fees. Over the next few months phone calls and emails to planning officers failed to find out what was happening – so a Freedom of Information Application was submitted. And at the end of October 2014 – the Council responded with details of an Enforcement Notice – requiring the car parking operations to cease by 1st March 2015…. hurrah we cried!

But the zombie still staggered on… the operator submitted another planning application for the site in December 2014 and so off went another Manchester Friends of the Earth objection letter.  All the campaigning was having an effect because this time Manchester planning officers decided that they response would be “Declined to determine application.”

Which for those of you not overly familiar with “planning speak” means that a “local planning authority may also decline to determine an application for planning permission if it has refused more than one similar application within the last two years and there has been no appeal to the Secretary of State.”   Or more succinctly ‘get lost’.

As with all good zombie tales – it takes a lot of effort to finally get rid of a zombie – but keep at and you will succeed….  now then, when do the Oxford Road zombies come back to life? 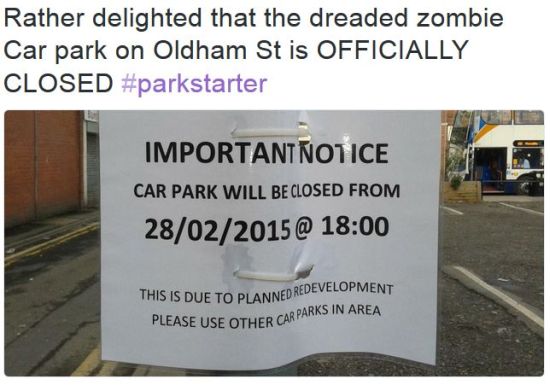