What election debates would you be having?

The phoney war is over and the General Election campaign is in full swing. Perhaps not surprisingly I’m an avid follower of politics, so I take a keen interest in how the debates pan out each day. And, like many, I get frustrated that the discussion rarely gets beyond the superficial.

Why not have 1 hour debates by the leaders on the purpose of the economy, or the education system?

Or about how the UK can make the very deep cuts in carbon pollution necessary and help developing countries grow clean, green economies?

Or how can we protect nature’s ecosystem services from over-consumption and degradation in the context of a growing global population?

Friends of the Earth exists to achieve this deeper change, as this brief review of our work over the last month shows.

Yet again the benefits of devolution became clear with our Welsh team, Friends of the Earth Cymru, securing a major victory with the passing of the Wellbeing of Future Generations (Wales) Act.

The Act requires public bodies to put the long-term wellbeing of people, nature and future generations at the heart of decision-making.

As well as ensuring this ground-breaking Act is properly implemented we will be exploring how we can achieve similar provisions in England, particularly in the context of what is expected to be a very lively devolution debate, post-General Election. 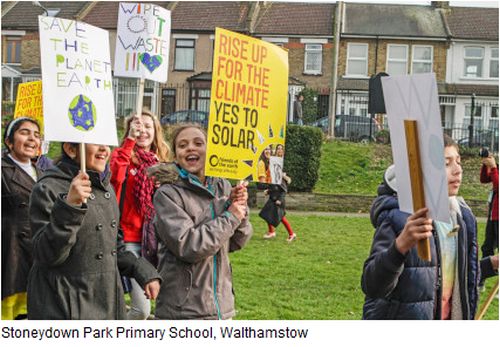 This is part of our campaign to ensure every school that wants them can have solar panels. And that community-owned energy becomes the norm.

Community-owned energy can be a tool used by teachers to support learning on energy management; it also helps foster community in schools in a society that has become very individualistic.

This is an agenda that all political parties should be embracing.

Our campaign on fracking goes from strength to strength, with moratoriums in Scotland and Wales and pressure within all the political parties to abandon it.

We have launched an action to get as many Prospective Parliamentary Candidates to sign-up to oppose fracking as possible.

Our fracking campaign is about more than fracking. It is about saying loud and clear that we need to keep the vast majority of fossil fuels in the ground.

It is a message increasingly echoed up and down the country by ordinary people across the political spectrum. Yet it hasn’t got through to George Osborne, whose Budget again threw tax breaks to the fossil fuel industry.

But the campaign is more than just this; it’s also about saying you can’t run roughshod over people by not involving them in decision-making. It’s a campaign for better democracy.

Ask your candidate to oppose fracking

We’ve published a think-piece by Roman Krznaric on empathy.

It follows a report by think tank Compass which argues that the current education system is turning out “worker ants and turbo-charged consumers” rather than citizens who employ critical thinking.

This debate on the purpose of education is largely absent from the General Election debates so far.

Roman Krznaric argues that enabling and increasing empathy has to be central to education if we are to successfully address global issues of inequality, conflict and environmental degradation.

A win for our nature campaign

The beavers in England that Friends of the Earth helped save are now again happily swimming in the River Otter in Devon.

We worked with Devon Wildlife Trust to achieve this victory. Over the centuries wildlife in Britain diminished. If we are to have the stable ecosystems necessary to enable future generations to thrive we need to learn to share spaces with nature.

Conserving what remaining wildlife we have is not enough.

We need to restore nature to our countryside and welcome it in our cities.

The beavers – and the bees – are Friends of the Earth’s first steps on this deeper journey.