Sharknado and solar energy: how are they linked?

Remember 2014? One Direction were still a five piece, Sharknado 2 had just come out at the movies, Michael Gove was still education minister and the Department for Energy had big ideas for solar power. It was a heady time.

In those days of optimism the Energy Department launched a strategy calling for 20GW of solar by the end of the decade. Government buildings would host to up to 4 million panels. The Department even teamed up with the Department for Education to call for a big push on solar schools.

A year on, where have those big ideas gone?

It’s fair to say that we raised an eyebrow when we heard the Government would be launching a solar schools plan so soon after we had begun to discuss our Run on Sun campaign for schools, but we gave them the benefit of the doubt.

Real change after all, is our goal.

Sadly that is not what we got. 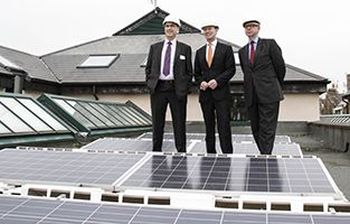 The Government issued a press release. They got in touch with Friends of the Earth. We helped get Michael Gove on to a roof (pictured).

They published a pamphlet in a dark corner of the internet. They sent it out to schools. And nothing else happened.

That was a year ago.

Sign up to our campaign for more solar power

Sadly since the Government first issued its strategy, its ambition for solar has waned. Where it once called for 20GW it now seems to be aiming for just over half that.

It has slashed support for ground mounted solar, and only belatedly done anything to help the rooftop sector.

Nothing major has been installed on the Government estate, while its solar schools plan has fallen off the radar.

It’s not as if we’ve not been telling them what to do, but soon the interest fizzled, the ministers changed and everyone went back to their origami.

Of course we didn’t lose interest, and we’ve been working hard to find alternative ways for schools to go solar, working with supporters to put pressure on local government and the London Assembly.

Now, with an election looming, we’re determined to put renewable energy back on the agenda.

We’re calling for all political parties to give every single school in the UK the freedom and support it needs to install solar within 3 years.

That means allowing them to access finance to cover the upfront costs, and providing impartial help and information.

Installing solar panels will save schools money, produce clean energy and be a powerful symbol of our commitment to building an energy system for the future.

Of course we want to go much further than just schools.

We’d like to see solar on millions of buildings by the end of the decade – from houses and libraries to bus stations and factories.

We are in the middle of an exciting change in the energy system. The irony is that even as the Government has gone cool on its solar strategy, prospects for the technology have never been better.

The costs of renewable energy are falling so fast that the old order is changing, and the big utilities are running scared.

But we don’t just want to see clean energy taking over. We want to break the energy monopolies and make sure that everyone can benefit.

Solar energy could put power into the hands of people everywhere. Be part of that change and help us bring the renewable revolution to every community in the country.

Sign up to our campaign for more solar power

Subscribe to this blog by email using Google’s subscription service