On Thursday 24th September, Manchester Museum will host the city’s first Bee Summit which will bring together local politicians, businesses, housing providers and land owners such as Manchester City Football Club and Network Rail to tackle the decline of bees and other pollinators in Greater Manchester and nationwide. (1) 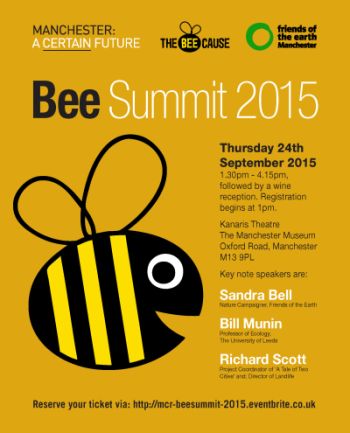 The Bee Summit is a collaboration between Manchester Friends of the Earth and Manchester: A Certain Future and will hear from national experts, including:

* Sandra Bell from Friends of the Earth who will outline the Bee Cause campaign’s achievements and actions for the future;

* Bill Kunin from Leeds University will cover his recent research on the impacts of pesticides on pollinators;

* Richard Scott, the Project Manager at Tale of Two Cities who brought the stunning array of wild flowers to the Princess Parkway and Hulme Subway will be talking about successful case studies and land management.

Without bees, food prices will rise – pollination of UK crops by bees and other insects is worth over £500 million a year. It would cost the UK farming industry £1.8 billion to pollinate their crops by hand. (2)

Steph Lynch, Manchester Friends of the Earth Bee Cause campaigner said “Our bees are in crisis. They have lost much of their natural habitat in the past 60 years, including 98% of wildflower meadows. We hope this summit will inspire local councils, business and community delegates to act to save our local bee populations.”

The event has sold out but press tickets are available, please contact Steph via manchesteracf@gmail.com

2)  For more information on the Friends of the Earth Bee Cause campaign see https://www.foe.co.uk/page/the-bee-cause-about

4) Manchester Friends of the Earth has endorsed Manchester: A Certain Future, an action plan for the city of Manchester to cut its carbon emissions by at least 41% by 2020. For more information, visit  www.manchesterclimate.com