Help Fergal #Save Our Solar

I’m Fergal. I chose to re-train in the solar industry to make a positive difference to climate change. Now I urgently need your help. 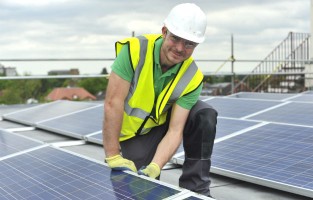 Last week the Government dropped a bombshell. They announced plans to slash all support for solar and leave companies like mine high and dry – putting real jobs and vital progress on clean energy at risk.

Tell your MP to save solar power in the UK.

Without urgent action an extra 1.6 million tonnes of carbon will be pumped into the atmosphere.

A staggering 20,000 people could lose their jobs. Thousands of schools, houses and community buildings – hungry for solar – will miss out.

It’s not just about panels being installed. Every one of my customers gains a greater understanding of climate change and how they can reduce their carbon footprint. The Government cannot put a price on this.

Instead of being at the heart of a global solar revolution, the UK risks falling far behind.