From Cumbria to Chennai: Paris climate talks can give people more protection from floods

The December 2015 floods in Cumbria are a shocking reminder of how even a rich, well-prepared country like the UK is at the mercy of extreme weather. The costs – emotional and financial – will be huge.

The sorts of storms that hit Cumbria are seven times more likely to lead to extreme rainfall, because of climate change. 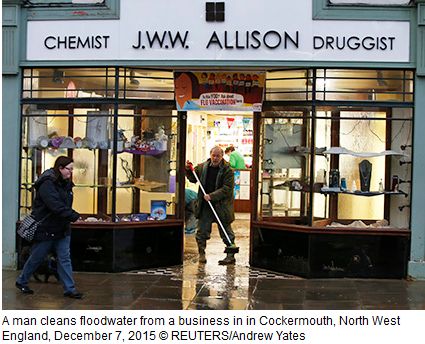 And the risks and impacts of catastrophic weather will only worsen, until we cut the coal, oil and gas pollution that is making climate change worse.

But this is not solely a UK story. As the floodwaters slowly recede in Cumbria, we should also think of people in countries far less equipped to cope with such disasters.

There are floods all round the world, and climate change is increasing their likelihood and severity. UNICEF reports that more than 500 million children live in areas with extremely high flood occurrence.

Recent floods around the world

Here are some of the floods which have hit poorer nations recently:

That’s why “loss and damage” – a means to help developing countries cope with the impacts of climate change – is a crucial part of the #COP21 climate talks in Paris which finish this weekend.

Loss and damage is likely to be one of the most contentious issues in the talks’ final hours, as richer countries seek to minimise how much responsibility they take.

The UK is one of the nations which is most historically responsible for the climate change we are seeing now – we have a moral obligation to help the people in other countries whose lives are being wrecked.

The UK needs to be at the forefront of nations championing a strong loss and damage mechanism in the crucial final hours of the Paris talks.

Simon Bullock is a climate campaigner for Friends of the Earth