Thousands of old landfills could be at risk of leaking out waste and contaminants into rivers and estuaries as sea levels rise, new research shows.

As today’s Independent reports, there are around 20,000 historic landfills in the UK that were dumping-grounds for our rubbish before modern waste regulations came into force. Many of them don’t have proper linings to prevent decomposing waste from leaching out into surrounding soils. And as research by Dr Kate Spencer and colleagues at Queen Mary University shows, some 5,000 of these historic landfills lie in areas at risk of flooding and coastal erosion – with some already starting to leach out their waste as sea levels rise.

Last year I visited one such leaking landfill at Tilbury, on the Thames Estuary. 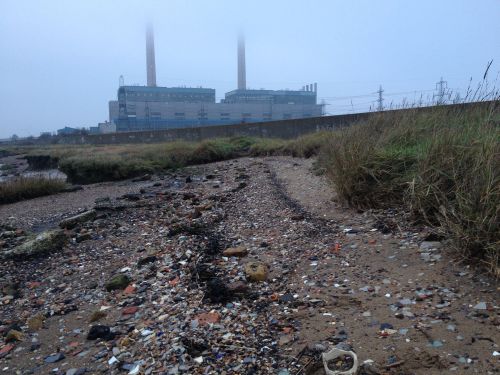 Tilbury power station, with the foreshore strewn with rubbish.

Accompanied by Dr Kate Spencer and London Waterkeeper Theo Thomas, I walked the footpath that winds along the Thames foreshore, until we came to a beach that appeared to be composed of man-made rubbish. From where we stood, out to the ominous bulk of Tilbury power station looming on the horizon, stretched two kilometres of waste. 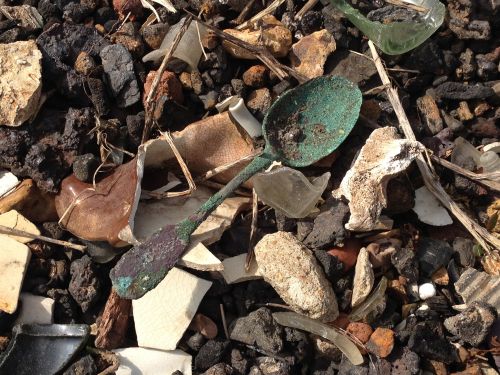 Broken glass, bits of china, animal bones, old car batteries, bakelite light switches, old shoes, plastic bottles, textile waste, an old spoon encrusted in a coppery green patina… The ‘beach’ crunched and clinked under our boots as we picked our way over a morass of glass and pottery, a geological stratum clearly dateable to the Anthropocene. 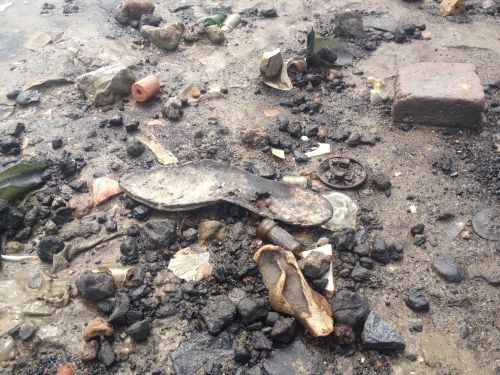 But this wasn’t just rubbish deposited by the waters of the Thames as it sweeps through London. It was clearly eroding out of the sandy banks next to the shoreline, lapped by high tides. The remains of a former sea wall, derelict and ineffective, could still be seen below the high-water mark. It was providing no defence at all to the hungry estuary, which had chewed away at the land to reveal layers and layers of landfilled refuse. 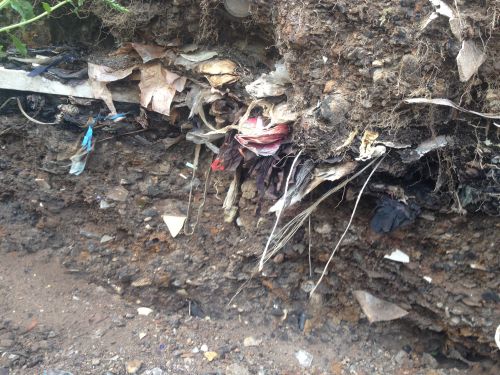 Some of this waste was clearly pretty old, and was showing little sign of breaking down: at one point, we strayed across a still-preserved scrap of newspaper bearing a photograph of 1930s Prime Minister Neville Chamberlain (pictured below). Elsewhere, it was obvious the waste was more recent. And this was just the visible stuff – as academic research has shown, old landfills are also leaching out chemicals, polluting soils and watercourses. And as global warming has progressed, the sea around the English coast has risen by around 10 centimetres since 1900 – increasing erosion, and meaning the risk of old landfills on coasts and floodplains becoming destablised will increase in future. 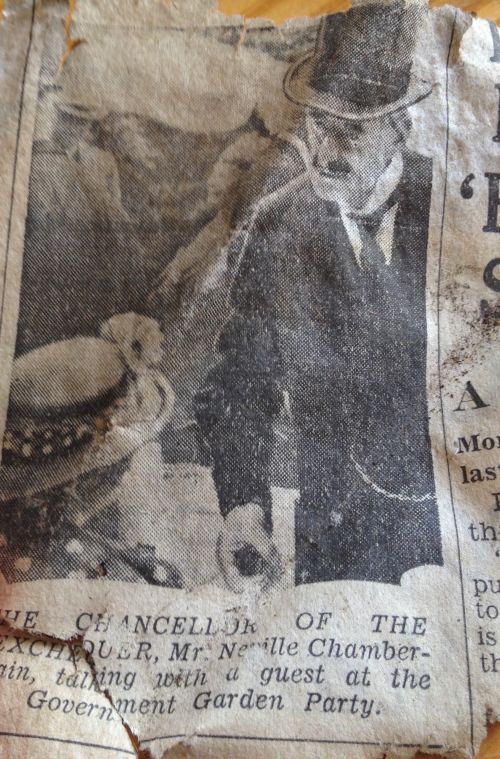 Why was all this waste here? And why on earth had the old landfill been allowed to leak out, littering the shore and polluting the Thames?

They also sent over a more detailed map, showing the historic landfills remain undefended from tides and rising seas: 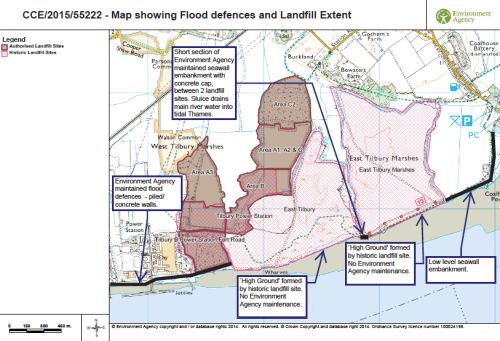 In other words, no-one is taking any responsibility for the huge amounts of waste that is now very clearly leaking out of the old Tilbury landfills.

And this is just one example. If, as the research suggests, there are thousands of old landfills at risk of leaking their wastes into watercourses and the sea across the UK, then this is a massive, ticking timebomb.

It’s essential that the Environment Secretary, Liz Truss, commissions an urgent inquiry into the problem of leaking landfills.

And the Government needs to get a grip on these two interwoven environmental disasters – the landfill legacy of a throwaway society, and the rising seas now encroaching upon them.