Transport for Greater Manchester are consulting on their plans for our transport system to reduce its climate change emissions and air pollution. If you’re concerned about climate change and air quality, this is an important consultation to respond to. We’ve made it easy for you (see below). The deadline is 29th April 2016.  See the ‘How can you take part?’ section below for contact details etc.

In April 2015, the Supreme Court ordered the UK Government to develop a new plan to urgently tackle illegal levels of air pollution. The ruling was the culmination of a five year legal battle fought by ClientEarth for the right of British people to breathe clean air.  Air pollution in the UK harms our health and causes tens of thousands of premature deaths every year. The air we inhale on the way to work, school and in our neighbourhoods has illegal levels of pollution.  It is estimated that air pollution causes over 1200 people to die prematurely in Greater Manchester each year. 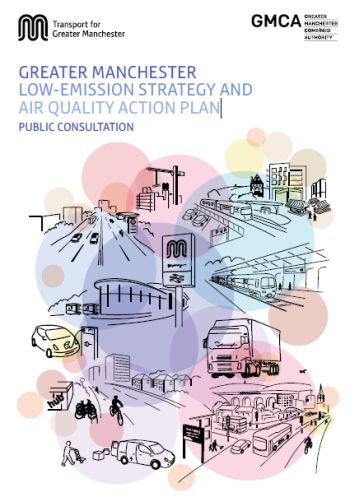 What does Friends of the Earth think?

Friends of the Earth supports the Healthy Air Campaign and we are calling for urgent action on air pollution.

The main cause of air pollution in Greater Manchester and in the United Kingdom is from traffic. It’s time to tackle the air pollution from too much dirty traffic.

How can you take part?

We have until Friday 29th April to respond and Manchester Friends of the Earth will be making a detailed response.

We would encourage as many people as possible to send in a response.  To help you navigate through the 116 page document we have highlighted some key issues below and produced some text that you may find useful. Feel free to add your own!

You can submit responses via the consultation website or by email:  GMLES@tfgm.com.  (Remember to send in your comments by Friday 29th April).

I am writing in response to the Low-emissions Strategy & Air Quality Action Plan consultation.

I am pleased to see that the impact of Greater Manchester’s transport sector on air quality and climate change is being given serious attention. I welcome your recognition of the fact that to ‘achieve very challenging targets for both carbon and NO2 in the context of a growing economy means… a concerted effort, potentially requiring radical actions’. Greater Manchester needs policies, actions, funding, timescales and genuine political leadership on this issue, which adversely affects the health of thousands of Greater Manchester citizens.

The strategy and action plan needs to provide clear leadership on reducing single-occupancy car journeys, cleaning up bus engines, and providing an environment that enables and encourages people of all ages to walk and cycle.

I would ask that the strategy and action plan include the following (please tick all that apply):

* TfGM takes the Regulatory Powers that Transport for London has, and uses these to develop a properly integrated public transport system.

* TfGM establishes a funding mechanism for active travel (cycling and walking) to ensure long-term planning and investment at a Greater Manchester level. It should not rely on national Government funding, but also consider more creative funding routes.

*   A network of Urban Distribution Centres is developed, linked to the use of cargo bikes for last-mile deliveries, to reduce the presence and impact of heavy freight.

*  TfGM investigates potential for Low Emission Zones and ambitious approaches such as pedestrian zones and banning HGVs from city and district centres.

*  TfGM needs to account for pollution associated with Manchester Airport and to reconcile the projected growth in flights with legal targets and obligations regarding air pollution and climate change.