Factsheet: Trading away EU Farmers – The risks to Europe’s agriculture from the TTIP

The Transatlantic Trade and Investment Partnership (TTIP) could have major
impacts on farming and food production in the European Union. Corporate lobby
groups on both sides of the Atlantic are pushing for more market access, but
European and American food is produced to different standards of food safety,
animal welfare and environmental protection. 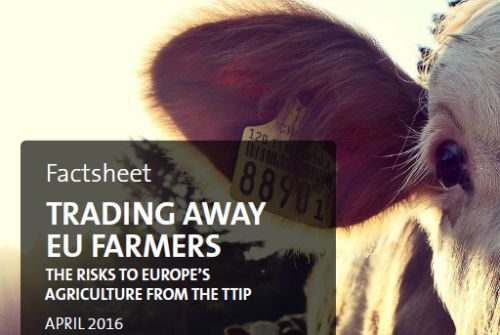 The food and drink industry in the European Union has an estimated turnover of
€1.2 trillion6, but the trade is highly complex, with variations between farming
sectors, types of manufacturer and different member states. Only a few studies
have even attempted to assess the impact of the TTIP on food and farming, and
they have struggled to capture this complexity.

The studies show that export opportunities created through any TTIP do not
necessarily translate into better incomes, with the US Department of Agriculture
predicting falls in the price paid to EU farmers in every food category. European
gains are restricted to a few sectors, such as cheese, but even these are highly
dependent on the US making changes to the ‘non-tariff measures’ that it uses
to restrict trade.

The models predict that the TTIP will increase food and agriculture imports from
the US, to the possible detriment of EU farmers, with the existence of whole
sectors potentially threatened. Producers supplying the EU from other world
regions would also potentially lose out as trade is displaced by US producers.

Civil society groups and farming organisations have expressed concern that
the TTIP will lead to the further intensification and corporate concentration of
agriculture on both sides of the Atlantic. Consumer and environmental protection
may suffer too, because both US government and producer organisations are
openly calling for the EU to weaken protection in areas such as the approval
of GM foods, pesticide safety rules and the bans on hormones and pathogen
washes in meat production.