Did you know that just 15% of the UK population takes more than 70% of our flights? With flying the fastest-growing cause of climate change, we’re calling for a frequent flyer levy that taxes travellers according to how often they fly.

Under our proposal, everyone could have one tax-free flight a year, with each additional flight being taxed at an increasing level. Best of all – Research by A Free Ride shows that such a levy would make it unnecessary to build any new runways.

Now there’s a Parliamentary petition (Early Day Motion 572) that MPs can sign to support the introduction of a frequent flyer levy. Please ask your MP to sign it.

Ask your MP to support a Frequent Flyer Levy 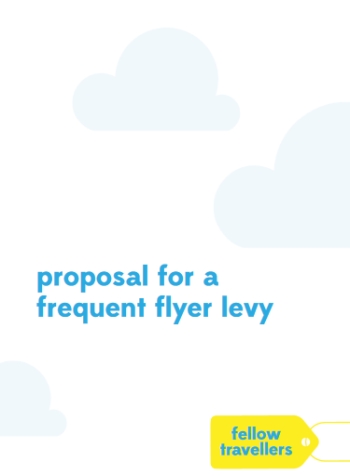 Text of the Early Day Motion is below:

This House notes that the Government’s commitment to limit aviation emissions in 2050 to no higher than 2005 levels and that, according to Department for Transport’s analysis, growth in demand for aviation means that the UK is already set to exceed this target by 25 per cent; believes that expansion at either Heathrow or Gatwick Airport is incompatible with the UK’s national and international climate obligations; further notes that air travel currently benefits from a highly favourable subsidies regime in the UK, with exemptions from VAT and fuel duty, while the current system of Air Passenger Duty has been ineffective in reducing demand for flights; notes that an estimated 70 per cent of all flights in 2013 were taken by just 15 per cent of the population, with 57 per cent of the population taking no flights abroad; supports the campaign for a new Frequent Flyer Levy, allowing individuals to make one tax free return flight per year and thereafter to be charged at a steadily increasing rate for each successive flight taken in that year; further believes this would be a socially progressive way to limit the environmental impact of aviation in line with official targets; and calls on the Government to introduce such a levy to obviate the need for any new runway capacity and invest the funds raised in further measures to reduce air travel.