Cuadrilla’s leaflet complaint is dropped without a ruling, while evidence of fracking risks grows

After more than a year of investigation, the ASA has closed fracking company Cuadrilla’s complaint against Friends of the Earth without making a ruling. Meanwhile, evidence of the risks of fracking continues to grow.

Last year fracking company Cuadrilla complained to the Advertising Standards Authority about one of our anti fracking leaflets.

But after more than a year, the complaint has been closed without a ruling. 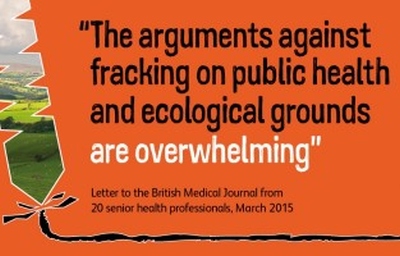 The scientific evidence that fracking can cause harm to people and the environment keeps stacking up. Friends of the Earth is not alone in pointing out the risks of fracking, to the climate, to public health, of water contamination, and to the natural environment.

Fracking has been banned or put on hold in countries and states around the world including France, New York State, Scotland and Bulgaria.

The risks of fracking

In April 2016, a major peer-reviewed study by research institute PSE Healthy Energy was published in academic journal PLOS ONE, which assessed 685 pieces of peer-reviewed scientific literature from around the world over 2009-2015 and found:

Last month the US Environmental Protection Agency published its final report on the impacts of fracking on drinking water. The EPA “identified cases of impacts on drinking water at each stage in the hydraulic fracturing water cycle. Impacts cited in the report generally occurred near hydraulically fractured oil and gas production wells and ranged in severity, from temporary changes in water quality, to contamination that made private drinking water wells unusable”.

Over half a million people in England alone live or work in premises that rely on a private water supply.

But what about in the UK?

Of course these studies necessarily have taken evidence from where fracking has already happened, not places, like the UK, that are just at the moment under the threat of fracking.

One of the main arguments put forward by government and industry is that environmental and health impacts from elsewhere in the world are unlikely to happen here because the UK has “better” regulation.

But another new study has been published by 2 academics at Stirling University which casts major doubt on that claim.

It says: “Although several reports and papers, including some from the UK government and its agencies, state fracking would be safe assuming there is or will be industry best practice and ‘robust’ regulation, the evidence base for such statements is remarkably sparse. We find very little support for this position in the relevant peer-reviewed scientific literature.”

Every time shale gas is taken out of the ground and burned, it causes greenhouse gas emissions.

Scientists agree that if we are to avoid dangerous levels of global warming, the majority of known fossil fuels need to stay in the ground.  This has been acknowledged by a diverse range of people and organisations – from Shell to President Obama and the Governor of the Bank of England.

Fracking for unconventional oil and gas just adds to the stockpile of fossil fuels that we can’t burn, making it more challenging to keep the world below the internationally agreed target of no more than 1.5 degrees of global warming.

To stop climate change, we need to leave around 80% of fossil fuels in the ground globally – let’s start with banning fracking.