Synopsis of CPRE’s response to the Greater Manchester Spatial Framework 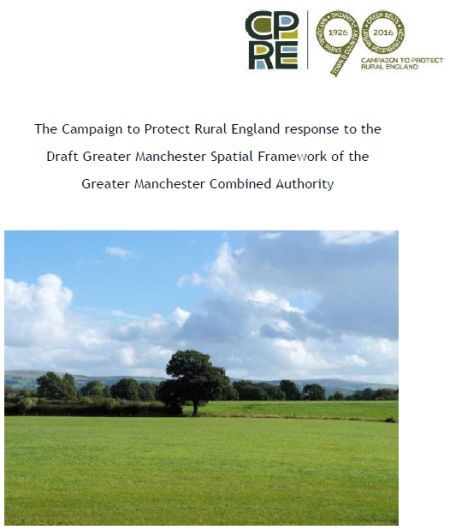 CPRE wants to see needed development built in sustainable locations, with adequate supporting infrastructure to make places better in the future.  It argues greenfields should not be needlessly sacrificed due to their immense benefits, not least to health and well-being, highlighting once countryside is gone, it is gone forever.  Key issues addressed are:

1) Too many jobs are being proposed, based on untenable high economic growth assumptions e.g. industrial and warehousing floorspace is forecast to grow at 40%, which fails to observe downward trends, and technological advances.

2) An independent expert demographer found flaws in the housing calculations, leading to at least 30,000 more houses being planned than are necessary.  The Housing Target should be 197,885 homes (9,894 per annum).

5) The GMSF fails to adequately show that the ‘duty to co-operate’ with neighbour authorities, causing excessive loss of Green Belt, e.g. with Cheshire East.

6) Too little quantity of development is focused on brownfield land at only 70% whereas previously 80-90% brownfield targets were successfully achieved.

7) In combination the above points to evidence that there are not exceptional circumstances for releasing 4,900 hectares of Green Belt land. If a realistic development quantum is being planned, appropriate densities are applied, and all brownfield land sources are exhausted, this would remove the need to build on Green Belt.

8) Any Green Belt release should be via a full Green Belt review with public consultation (in advance of GMSF being progressed).  Released land must be subject to master-planning.

9) Analysis of whether an absolute reduction in carbon emissions is possible is needed.

CPRE included written objections to some 19 greenfield sites proposed for development due to harm outweighing the benefit.

The full version of the CPRE response, with demographic appraisal appended, is available via DropBox.

A new Urban Network pilot project is about to launch to set up new CPRE groups in both Greater Manchester and Merseyside to progress key messages of what we want for the countryside in the future.  We must ensure decision makers are aware of the strength of feeling for countryside and green spaces in urban places in the future.  If you are interested in participating in the Greater Manchester group let us know.

Further information will be available at www.cprelancashire.org.uk in due course.