Over 50 women will join a breakfast bike ride to the Whitworth Art Gallery this International Women’s Day (8 March) to celebrate the start of safer ‘Danish-style’ cycling conditions in the city. The ride, which is organised by charities Sustrans and Love Your Bike as part of Women on Wheels events during March, highlights the need for more cycle paths separated from traffic in Greater Manchester. 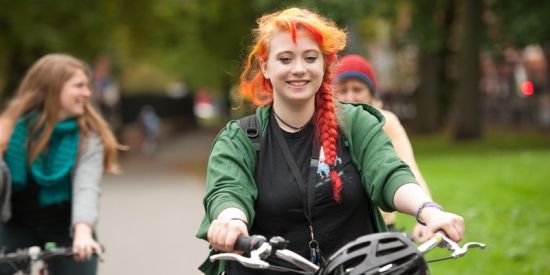 Participants will commute along the new Wilmslow Road cycle corridor – Manchester’s  longest cycle route separate from traffic, and Sustrans’ traffic-free Fallowfield Loop. They will arrive at the Whitworth Art Gallery café for breakfast of coffee, tea and Danish pastries at around 8.30am and pose for photos for an online exhibition of women and cycling.

Upto four times as many men cycle in Britain compared to women, mainly due to fears around safety, but in countries like Denmark, which have a quality network of traffic-free cycle routes, women outnumber men. In the recent Bike Life report for Greater Manchester female interviewees highlighted safety as a concern and 75% of all respondents said they supported more investment in cycling.

Rosslyn Colderley, Sustrans’ England Director North said: “This International Women’s Day we want to celebrate the new Wilmslow Road cycle corridor. We know that women are put off cycling here in Manchester because of dangerous roads. Yet in Denmark, where traffic-free cycle paths are the norm, more women cycle than men.

“These new cycle routes will help more people feel safer to get on their bikes and the Women’s Day ride is a chance for women to try out Greater Manchester’s first version of a Danish-style route, and demonstrate their support for more similar routes.”

Catherine Thomson, Love Your Bike volunteer said: “Love Your Bike campaigns for improved cycling facilities to enable more people to cycle to school, work and for leisure.  It is fantastic that these new cycle routes are available – but as research shows more people would cycle if there are safe routes – so we need to invest in building a network of safe, convenient cycle routes across Greater Manchester.”

The Danish-style Women’s Day Bike Breakfast to the Whitworth begins at 8am from St Werburgh’s Road in Chorlton and the Crayfield Road entrance of the Fallowfield Loop in Levenshulme, or other points along the Fallowfield Loop by arrangement. Please book your ticket at www.sustrans.org.uk/events

Greater Manchester aims to increase cycling levels to 10% of regular journeys by 2025, and recently opened the Wilmslow Road cycleway as one of six new routes separate from traffic in the city region. The ‘Dutch-style’ cycle route on Oxford Road is due to open later this year..  Sustrans owns and manages the Fallowfield Loop, a former railway line which runs six miles from Gorton to Chorlton. It is part of the National Cycle Network, which was created by Sustrans and includes over 14,700  miles of on and off-road cycle routes around the UK.

Please register your place (and Breakfast!) via Eventbrite.

Women on Wheels events are funded by Transport for Greater Manchester and run throughout March. For more information look up www.tfgm.com/wow

Sustrans is the charity that’s enabling people to travel by foot, bike or public transport for more of the journeys we make every day. It’s time we all began making smarter travel choices. Make your move and support Sustrans today. www.sustrans.org.uk

Love Your Bike is based in Greater Manchester. We aim to promote cycling and to help make it an attractive, accessible and fun way to get around. Cycling is far more than a leisure activity: it is the low-carbon transport of the future. Co-ordinated by Manchester Friends of the Earth, we aim to work closely with other like-minded organisations.  www.loveyourbike.org