What is the net climate impact of grass-fed ruminants, taking into account all greenhouse gas emissions and removals? The new report Grazed and Confused looks into the evidence.

But is all beef bad? Some argue that beef from grass-fed cows has higher welfare, nutrition and other credentials than meat from animals that eat intensively farmed, high-protein feeds. Most cattle get a mixture of such feeds and grass. Many also argue that purely grass-fed cows not only produce less emissions than those fed soy or grain, but that they can even help absorb carbon from the atmosphere (grass uses up carbon from the air via photosynthesis). My colleagues and I have produced a new report for the Food Climate Research Network that shows the evidence suggests otherwise. 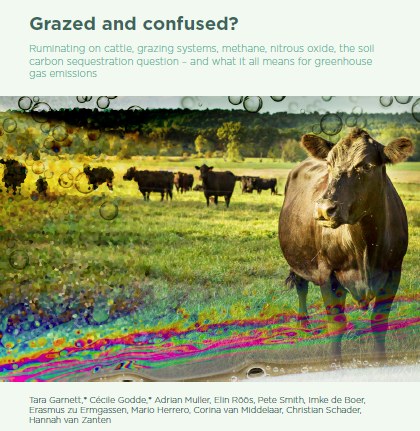 Most studies conclude that if you look at the amount of land used and greenhouse gas emissions produced per kilogram of meat, pasture-based cattle actually have a greater environmental impact than animals fed grains and soy. This is because commercial feeds tend to be less fibrous than grass, and so cows that eat them produce less methane (through belching and flatulence), which is a potent greenhouse gas. Animals in more intensive, grain-fed systems systems also reach slaughter weight faster than grass-fed animals do, so emissions over the animal’s entire lifetime are lower.

However, some academics and many within the alternative farming movement challenge these conclusions. They say that these studies only factor in one side of the greenhouse gas emissions equation: the animals’ emissions. Inspired by ideas such as ecologist and farmer Allan Savory’s principles of “holistic grazing management”, they argue that if you graze cattle in the right way, their nibbling and trampling actions can actually stimulate the grass to put down deep roots and actively remove carbon from the atmosphere. This is plausible under certain circumstances, which is why we considered it in our report.

Some even argue that the amount of carbon removed by this type of grazing can actually exceed the cattle’s total emissions. In other words, they should be seen as an essential part of the climate solution.

Advocates of grass-fed cows also point out that methane gets broken down in the atmosphere after about 12 years, so it’s only a temporary problem. These and other arguments are even leading to moves to award carbon credits to grazing initiatives.

So are these claims justified? We decided to sift through the evidence to find out. We recognised that the grass-fed issue is about multiple social, ethical and environmental concerns but we decided to focus on just one concern: climate change. We asked one question: what is the net climate impact of grass-fed ruminants, taking into account all greenhouse gas emissions and removals?

We found that well-managed grazing in some contexts – the climate, soils and management regime all have to be right – can cause some carbon to be sequestered in soils. But, the maximum global potential (using generous assumptions) would offset only 20%-60% of emissions from grazing cattle, 4%-11% of total livestock emissions, and 0.6%-1.6% of total annual greenhouse gas emissions.

In other words, grazing livestock – even in a best-case scenario – are net contributors to the climate problem, as are all livestock. Good grazing management cannot offset its own emissions, let alone those arising from other systems of animal production.

What’s more, soils being farmed using a new system of management, such as grazing, reach carbon equilibrium, where the carbon that flows into soils equal carbon flows out, within a few decades. This means that any benefits from grass-fed cows are time-limited, while the problems of methane and other gases continue for as long as the livestock remain on the land. Plus, a change in management or climate – or even a drought – can overturn any gains.

As for methane, the argument that its impact is temporary and so not important is flawed. While the warming effect of any given pulse of methane is temporary, the total warming impacts will continue for as long as the source of methane continues. Methane will be emitted and continue to warm the planet as long as cattle are still reared. The problem only disappears if ruminant production is abandoned.

How we use land is also changing, which poses new challenges. Grazing ruminants have historically driven deforestation and the carbon dioxide emissions associated with it. But today, demand for soy and grains to feed pigs, poultry, and intensively reared cattle poses a new threat. This drives the conversion of grassland to grow such grains and the release of carbon stored in it.

That said, ruminants are still implicated. Forests are still cut down while grasslands are being intensified to support more livestock farming. This means using fertilisers or planting legumes, which cause nitrous oxide emissions, on top of the methane the animals produce. In other words, whatever the system and animal type, rising animal production and consumption is driving damaging changes in land use and associated release of greenhouse gases.

The priority for now and coming years is to figure out the least bad environmental way of using land and other resources to feed ourselves and meet our other developmental goals. We need to question the common assumption that high levels of consumption in affluent countries, and rapidly rising demand in developing countries, are inevitable. The more that demand for meat increases, the harder it will be to tackle our climatic and other environmental challenges.