We ran this email campaign in December 2017 in the run up to a Greater Mancehster Combined Authority meeting at which Chris Boardman would be presenting ‘Made to Move: 15 steps to transform Greater Manchester’.

See our press release and the GMCA’s announcement and report.

Made to Move aims to put “people first, creating world class streets for walking, building one of the world’s best cycle networks within a generation” and outlines 15 steps to achieve this goal including a commitment to establish a “ring-fenced, 10 year, £1.5 billion infrastructure fund and immediate short term Mayor’s Active Streets Fund to maintain delivery for walking and cycling.”

Love Your Bike strongly supports the Made to Move plan and is encouraging people across Greater Manchester to contact their Council leaders and urge them to support the plan.

* 77% of Greater Manchester residents support building more protected roadside cycle lanes, even when this could mean less space for other road traffic.

* £70 million annual benefit to Greater Manchester from all trips currently made by bicycle.

* 86p per mile net benefit for each mile cycled instead of driven. 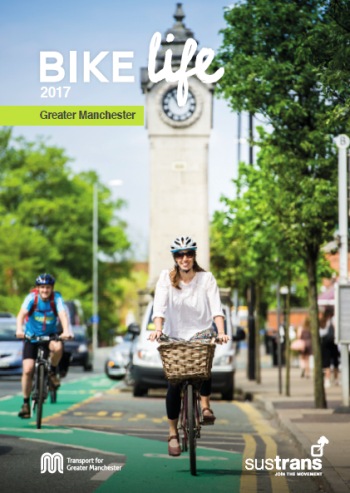 More than one million cycle journeys have been made on the Oxford Road and Wilmslow Road Cycleway in Manchester since recording began in September 2016.

The Oxford Road route has demonstrated that when we provide safe and convenient cycle routes more people will cycle and more than 75% people in Greater Manchester support building more protected cycle lanes.

The economic, environmental, health and social benefits from increased levels of cycling and walking are clear, it is now time for the Greater Manchester council leaders to show leadership and support the ‘Made to Move’ plan and provide the funds required to deliver high quality cycle schemes.