To: Museum of Science & Industry Shell Out! No place for big oil in public science

Museum of Science & Industry: drop your sponsorship deal with Shell for the upcoming exhibition ‘Electricity: the spark of life’ 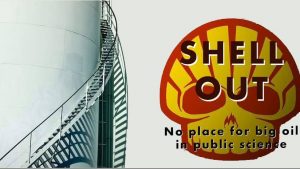 Why is this important?

The summer of 2018 has already drawn unprecedented levels of attention to the growing effects of climate change, with record breaking temperatures and serious moorland fires in the hills surrounding Manchester. As the world suffers a record-breaking and deadly global heatwave, the need to transition away from fossil fuels could not be clearer.

The Museum of Science and Industry has an important role in inspiring children and young people to become the climate scientists and energy system engineers of the future. Fossil fuel companies like Shell have no role in that future. By partnering with Shell, the Museum of Science and Industry is giving legitimacy to a company who actions are endangering the environment on a global scale.

Naturalist and Broadcaster Chris Packham has already signed in support of our campaign stating that:

‘As the world swelters and wildlife struggles in this unprecedented heatwave, MSI has decided to partner with Shell, one of the corporations responsible for fuelling climate change. A museum dedicated to science education should not be helping promote any company that is actively exacerbating this planetary emergency until they show a serious proactive drive to switch to renewables. And thus far this is not happening.’

Friends of the Earth are a signatory to the letter to Museum of Science and Industry.