An investigation by a group of Levenshulme parents into air pollution across the Manchester suburb has revealed shocking levels of air pollution, either approaching or over illegal levels.

The results come as parents met at Levenshulme Inspire community centre (Saturday 1 December) to discuss local air pollution, and propose ideas to tackle illegal levels of air pollution in Levenshulme and across Greater Manchester. [1] They were joined by local Councillors Dzidra Noor and Basat Sheikh.

MP for Manchester Gorton, Afzal Khan, tweeted support, saying “Thank you for raising the importance of Levenshulme air pollution and what we can do to clean up our air for everyone.” [2]

If air pollution levels were as bad all year as they were for the duration of the study this could mean that residents across Levenshulme would be blighted by illegally polluted air – including near schools and nurseries.

Everyone has the right to breathe clean air, but each year in the UK air pollution causes 40,000 early deaths, and stunts the development of children’s lungs. [3] In Greater Manchester it has been estimated that more than 2,000 people are dying prematurely each year. [4]

The Levenshulme investigation started after local parents became concerned about air pollution and possible links to common breathing problems locally – including high incidences of wheezing and use of inhalers amongst babies and toddlers, and emergency hospital admissions.

Parents and grandparents at local schools have also raised concerns with local Councillors about pavement parking near school entrances, with engines left ‘idling’, and heavy traffic potentially making walking to school unsafe and exacerbating the problem of air pollution.

The parents group has monitored levels of nitrogen dioxide (NO2) in ten locations in Levenshulme, six in June 2017 and four recently in October 2018 [5]. The four latest results published today (3 December) show that air pollution remains high outside schools and nurseries and is approaching illegal levels – including 38.3 ug/m3 outside Levenshulme High School for Girls – while on Stockport Road A6 two recordings found pollution well over legal levels, of 48.2 and 60.2, including outside a Dr’s surgery and leisure centre.

The pollution was monitored for two weeks, providing a snapshot of NO2 pollution for that time. [6] NO2 is a toxic gas which inflames the lining of the lungs. The legal annual limit for NO2 is 40 micrograms per cubic metre (ug/m3) but there are no safe levels of exposure to air pollution.

“As a grandmother I am concerned for all children who have to negotiate busy roads and unsafe pavements on their way to school. Children are breathing in what is described by the World Health Organisation as ‘unsafe air’. This will have a detrimental impact on children’s health for years to come. Cars which park on pavements near schools are particularly dangerous as drivers often leave engines idling.

“We are hoping to find solutions to the problems of heavy traffic in the local community. Making people aware is the first step, joining together and taking action is necessary in order to make our air healthy for everyone.”

“Every parent I know locally has had to go to hospital with a child having breathing problems, and many regularly use inhalers. I stand at the crossroads at Stockport Road with my children every day breathing in illegal air, and it horrifies me. We need urgent action to cut pollution for the sake of children’s health across Greater Manchester.”

The latest results come as council leaders in Greater Manchester grapple with how to meet the region’s legal air pollution limits and are reportedly considering a Clean Air Zone. [7]

Pete Abel of Manchester Friends of the Earth said:

“All the local council areas in Greater Manchester have illegal air pollution levels and we urgently need our council leaders to introduce the most effective measures to protect people’s health in the shortest time possible.

“The Government’s own evidence shows that Clean Air Zones are the best measure to clean up our dirty air – what are our council leaders and GM Mayor waiting for?”

3. Air pollution costs lives and billions of pounds. It is one of the UK’s biggest killers, causing 40,000 early deaths in the UK every year. Dirty air leads to worsening asthma symptoms, heart disease and even lung cancer. Air pollution has even been associated with changes in the brain linked to dementia and can lead to children growing up with smaller lungs. For more information please see What are the effects of air pollution? https://www.foe.co.uk/clean-air and https://www.rcplondon.ac.uk/projects/outputs/every-breath-we-take-lifelong-impact-air-pollution

6. The results are from diffusion tube monitoring and provide a snapshot of the air pollution for the time and places that were monitored. They are not directly comparable to annual data, because over a year the weather varies considerably and level of air pollution with it, so the annual mean results could look very different. However, Manchester City Council’s annual monitoring station on Stockport Road also shows levels over the legal limit of 40 ug/m3 and therefore these results are supported by official council data. 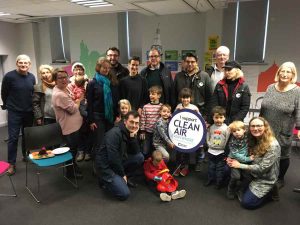