Peace History Conference Presents: The Last Weapon and The Weapon Unsheathed by Theodora Wilson Wilson.
On this evening we will be holding an event surrounding banned books – more specifically the works of Theodora Wilson Wilson. Local Film-maker Nick Wilding has put together a short film with Maxine Peake, discussing The Last Weapon, the context within which it was written, and features reenactments of the novel from Maxine.

Afterwards, there will be a talk (title TBC!) from academic Paul Anderson, followed by discussion with the audience.

Tickets available through Eventbrite or on the door – £6 adults and £4 concessions. 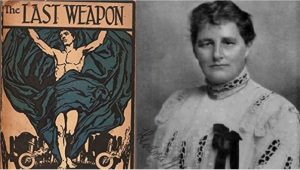 The book The Last Weapon, by Theodora Wilson Wilson – a Quaker and lifetime pacifist – was a story showing the futility of war, and clearly why men should not join the army. It was published in 1916, and was so popular that it ran to four editions within the first 6 months.

In the story, Theodora not only brought out the suffering of the soldiers, but lambasted the pillars of the establishment for encouraging war for their own ends. For example, the get-rich arms manufacturers and the politicians, aristocracy, even the church, and the press who supported them. Theodora forecast the invention of a weapon of mass destruction – a super weapon – which has now come to pass with a nuclear weapon such as the warheads on the Trident submarines. The arguments she puts forward are telling.

The government became deeply concerned about its popularity and powerful anti-war and anti-weapon of mass destruction sentiment, resulting in a total ban of the book in 1918. They attempted to seize and destroy all copies, but luckily for us, some remained. We have an original copy in our possession, and 101 years after its banning, want to celebrate its message of peace by republishing the book.

Please donate to our crowdfunder to republish this powerful book!