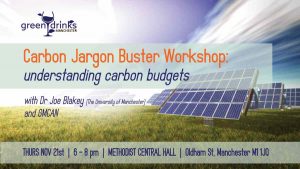 A “carbon budget” is an estimate of the amount of Greenhouse Gases that can be released into the atmosphere while keeping global temperatures below a safe level. Budgets have been proposed at a global level and also at nationally where they form part of the guidance for government from the Committee on Climate Change. More locally, carbon budgets have been adopted by Manchester City Council and the Greater Manchester Combined Authority.

These budgets establish what are thought to be a fair share of the remaining relatively safe quantity of emissions and therefore have value as both a planning and a rationing tool. They also help to focus on the quantity of emissions rather than target dates. However, they also involve making a number of assumptions, for example about safe levels of warming and fairness between nations.

This workshop will explain the thinking behind carbon budgets and both the science and the assumptions behind them. It will help you to use the concept in campaigning and to contest its questionable uses.

The event will consist of an introduction and overview from Joe Blakey*, followed by questions and discussion.

It has been organised by Green Drinks Manchester and Greater Manchester Climate Action Network.