Join us for inspirational talks, debates, drinks, and music, where guests can meet conservationists and enthusiastic speakers will share their first-hand account with endangered rhinos. Be bewildered by African plant and animal specimens from the collection of Manchester Museum, and take your first lesson in Kizomba, where the African rhythm will take hold of your feet. 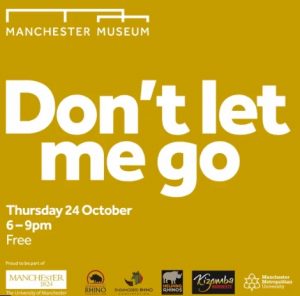 Rhinos once roamed throughout Europe, Asia and Africa, and were known to early Europeans who depicted them in cave paintings. Within historical times, they were still widespread across Africa’s savannas and Asia’s tropical forests.

But today, very few rhinos survive outside protected areas, and all five species are threatened, primarily by poaching. This poses a major threat to the survival of all rhino species, particularly Africa’s endangered black rhino and Asia’s critically endangered Javan and Sumatran rhinos. Due to the current escalating poaching crisis, rhinos are facing extinction in the wild in just 10 years. Already the critically endangered black rhino population has been hard hit with less than 5,000 remaining in the wild. There are around 20,000 Southern White Rhinos remaining, but the Northern White has been wiped out in the wild with only two of the species remaining.