Not Just Bollywood/ A Dog and His Man

A Dog and His Man is yet another startling directorial debut from a new wave of Indian independent filmmakers who continue to question the status quo of Indian society. Writer and director Siddharth Tripathy’s debut feature is a stark examination of the ways in which corporate mining companies and allied industries have pillaged their way through the small towns and villages of India.

Having been served an eviction notice to leave his home in Chhattisgarh, Shoukie looks on despondently as his village is steadily consumed by a mining company who go about wiping away a history and past with a ruthless, apathetic determination. Together with his dog Kheru, his only friend, Shoukie defies the orders of the mining company and remains the last person in a village which has witnessed mass displacement. Tripathy draws inspiration from his own life as an officer serving eviction notices, painting a contemplative counter narrative in which victims of neoliberalism like Shoukie are powerless ghosts in the face of corporate power. This is a defiant political tale about exploitation, displacement and greed. 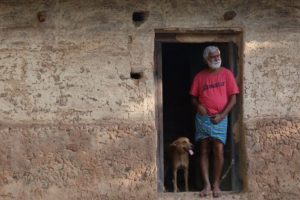