As the world’s biggest plastic waste importer, by 2016 China was receiving ten million tons per year from most of the developed countries around the world. With high external costs impacting the local environment and health, these imports are reborn here in these plastic workshops into “recycled” raw materials for the appetite of China – the world factory.  This waste is then exported back to where they came from with a new face such as manufactured clothing or toys. 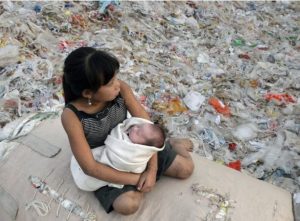 Plastic China’s main character Yi-Jie is an unschooled 11-year-old girl whose family works and lives in a typical plastic waste household-recycling workshop. As much as her life is poor and distorted, she’s a truly global child who learns about the outside world from the waste workshop that her family lives and works in.

About the director
Wang Jiuliang is considered the first independent documentary filmmaker who uses camera to raise environmental awareness in China. He works as a freelance photographer based in Beijing. From 2007 to 2008, he created photography series “China’s Traditions in Worshiping Gods and Spirits.” Wang has been engaged in the investigation about the garbage pollution surrounding Beijing since 2008. He presented the photography series “Beijing Besieged by Waste”, and a documentary in the same title.

Curated by Chinese Independent Film Network UK and supported by UK Arts and Humanities Research Council (AHRC), Earth in Crisis brings award-winning directors to cinemas across the UK and showcases a series of Chinese eco-documentary films that foreground the growing ecological emergency facing our planet.