The March for Science, on 22nd April, is a show of defiance against the increasing anti-science, anti-rational rhetoric in the USA and UK. Coinciding with Earth Day, the March for Science is a celebration of science and an opportunity to raise awareness about climate change and sustainability.  The main event is in Washington DC but we have our own satellite event happening in Manchester, meeting at Albert Square at noon.

Click here for event details. Join us if you can for an afternoon of celebrating science!

Manchester’s satellite march on support of science and reason. We are scientists and science enthusiasts. We come from all races, all religions, all gender identities, all sexual orientations, all abilities, all socioeconomic backgrounds, all political perspectives, and all nationalities.

It’s is a celebration of our passion for science and a call to support and safeguard the scientific community. Recent policy changes have caused heightened worry among scientists, and the incredible and immediate outpouring of support has made clear that these concerns are also shared by hundreds of thousands of people around the world. The mischaracterization of science as a partisan issue, which has given policymakers permission to reject overwhelming evidence, is a critical and urgent matter. It is time for people who support scientific research and evidence-based policies to take a public stand and be counted.

If you can help with organising / publicising this event please contact the Manchester Science march – Street Team via the Facebook page. 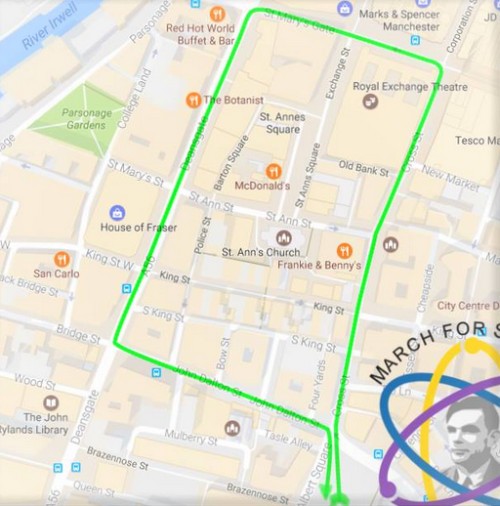