Siemens have just agreed to a contract to build communication infrastructure for the proposed Carmichael coal mine in Queensland, Australia.
As Australia suffers its most destructive fire season in living memory, the Adani mining corporation plans to build the biggest coal mine Australia has ever seen! 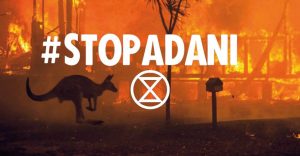 Siemens will play a crucial role in making the mine happen – which means they had the power to seriously delay, hinder or even stop the monstrous project – after other communications companies refused to work with Adani.

Instead, they are justifying their enabling of this out-of-control ecocide with the usual need to “balance stakeholder interests in the global community”…?

This demonstrates more clearly than ever how desperately we need fundamental system change.

On Friday morning we will be outside their office in Manchester, holding them to account and letting them know how wrong this is. This is an emergency!
Come and join in on this low risk action, bring placards and banners!