The Greater Manchester Pension Fund (GMPF) is the UK’s biggest local authority pension fund with over 370,000 members, over £22 billion in assets and over £1.2 billion directly invested in fossil fuel companies that engage in fracking, coal mining and oil and gas extraction. 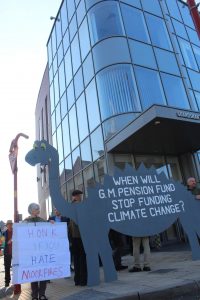 A growing number of local authority pension funds have already begun to stop investing in fossil fuels, including Merseyside and South Yorkshire. Globally over 900 institutions have done so with a value of over $7 trillion.

Fossil Free Greater Manchester ( www.fossilfreegm.org.uk ) is a coalition of organisations and individuals calling upon the GMPF to:

We urge all climate groups in Greater Manchester to support this protest outside the AGM of the Fund on Friday 19th July gathering from 12.30 onwards.