The Atom film screening and Q&A with film-maker

Join CND for a film screening of ‘The Atom’. We’ll be joined by its producer and director Vicki Lesley for a Q&A session hosted by CND General Secretary Kate Hudson.

‘Behind-the-scenes political drama meets sentimental screen romance in this sweeping international feature documentary, delving deep into the past of the world’s most controversial energy source. With gems from the archives, a lush romantic score and a warm and playful tone, the film charts the West’s rollercoaster love-hate relationship with nuclear power over the past 75 years. 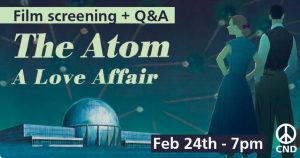 It’s a dramatic tale of belief, betrayal, intrigue and hope, and it’s told by the scientists, engineers, politicians and campaigners who experienced it first hand.’

Buy your ticket for £6 via Eventive