At the Manchester Cycle Forum on Tuesday 28th June, a number of changes to the cycle infrastructure designs on the Oxford Road corridor were outlined. Ironically, these changes appear to have come about as a result of concerns raised about a different scheme – the Cycle City Ambition Grant (CCAG) route from Rusholme to Didsbury.

Love Your Bike has consistently supported the case for high quality – protected space for cycling on the Oxford Road corridor and elsewhere. See ‘A little background’ section below.  We continue to support the Oxford Road scheme but believe that some of the proposed changes will make the cycling facilities less attractive, less comfortable and less safe.

The proposed changes to the Oxford Road scheme are focused on the Nelson Street / Grafton Street area, the Sidney Street area and Oxford Street area (between Whitworth Street and Portland Street). See images below and a PDF is available.

The original designs that went out to consultation are available on the TfGM website.

A brief description of the the proposed changes was provided and states that: 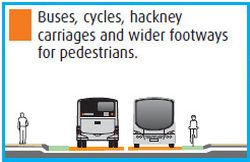 In 2009 the initial designs for the Oxford Road Bus Priority scheme included the standard ‘advisory green paint cycle lane’ which would mean any people cycling being sandwiched between moving and stationary buses.

The Love Your Bike response to the first consultation on the Oxford Road proposals back in December 2009, highlighted that “the current plans for the cycle lanes require buses to cross the cycle lanes every time the vehicle pulls into a bus stop. As the designs currently stand the potential conflicts are between “big bus” and “little bike”. 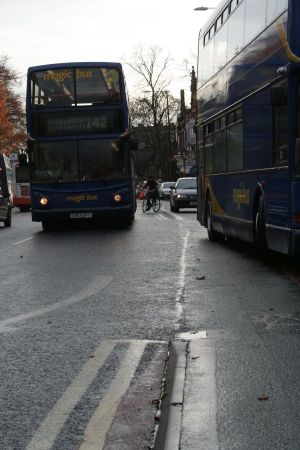 In 2013, after four years of campaigning, Transport for Greater Manchester and Manchester City Council agreed to the introduction of ‘Dutch-style’ segregated cycle lanes and in particular a design that would avoid the conflict between buses and people on bicycles at bus stops.

In 2013, the Greater Manchester authorities signed up to a cycle strategy that ”aims to double the number of daily cyclists by 2015 – and then double it again by 2025. Greater Manchester’s vision is for up to 10% of all journeys to be made by bike by 2025.”

In “Getting moving: a cycling manifesto for Greater Manchester“, Love Your Bike highlights that to achieve the levels of cycling outlined in the GM Cycling Strategy, to make cycling attractive and accessible and to enable more people to choose to use a bicycle for short trips that all cycle routes must be: Safe, Coherent, Direct, Comfortable, Attractive and Future-proof.    These same design criteria are now reflected in the TfGM Cycle Design Guidance.

We need to make sure that the proposed plans for Oxford Road – already one of the busiest cycle routes – go as far as possible to meet these criteria.  The overall scheme is not yet ‘Dutch’ or Danish standard but are a huge improvement on what was there before – as this video on the Rusholme cycle route produced by Greater Manchester Cycling Campaign highlights.

Please email Manchester City Council and show your support for the scheme and ask for the best possible cycling provision on the Oxford Road corridor.

(This email action is now closed. Many thanks to everyone who took part.)