This month’s open meeting will hear about the work of Friends of the Earth International and the local Amnesty International group on their work to protect human rights and environmental defenders around the world.

Environmental rights mean access to the unspoiled natural resources that enable survival, including land, shelter, food, water and air. They also include more purely ecological rights, including the right for a certain beetle to survive or the right for an individual to enjoy an unspoiled landscape.

Human rights abuses are being perpetrated against environmental and community campaigners around the world. The full extent and severity of this situation has recently become clearer thanks to the committed work of groups like Global Witness, and by the UN Special Rapporteur on the situation of human rights defenders. Friends of the Earth advocates for justice for those affected and works to raise awareness with the kind support of the European Union.

Murder is just one of a range of tactics used to silence land and environmental defenders, including death threats, arrests, sexual assault and aggressive legal attacks.  According to Global Witness, killings of defenders are not only growing, they’re spreading too. In 2016 they documented 200 killings across 24 countries, compared to 185 across 16 in 2015. Almost 40% of those murdered were indigenous. A lack of prosecutions also makes it hard to identify those responsible, but Global Witness found strong evidence that the police and military were behind at least 43 killings, with private actors such as security guards and hitmen linked to 52 deaths. See the Defenders of the Earth report for more information. 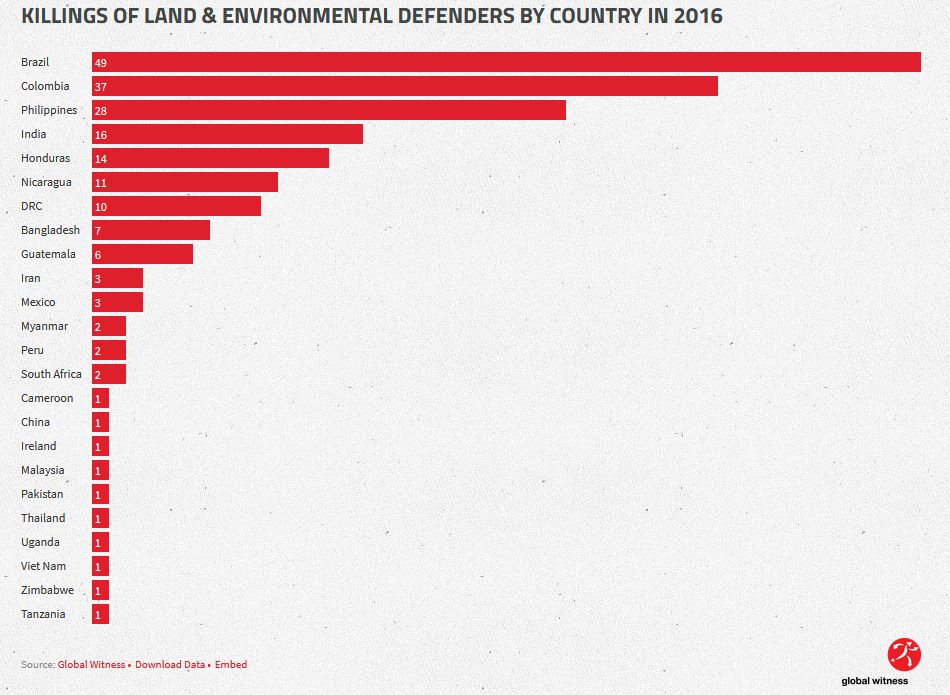 These numbers are shocking, and evidence that the environment is emerging as a new battleground for human rights. Across the world industry is pushing ever deeper into new territory, driven by consumer demand for products like timber, minerals and palm oil. Increasingly communities that take a stand are finding themselves in the firing line of companies’ private security, state forces and a thriving market for contract killers.

Join us to learn more the global solidarity work to help protect environmental activists around the world. Videos from Global Witness and solidarity actions and letter writing.

All welcome – hope to see you there.

If you are new to Manchester Friends of the Earth and would like to learn more about what we do there will be an introductory session run by Cat starting at 6.15pm for 20 minutes. Email cat@manchesterfoe.org.uk

For more details of Friends of the International’s work on environmental and human rights see Human Rights Defenders and the Cartagena declaration on human and environmental rights.